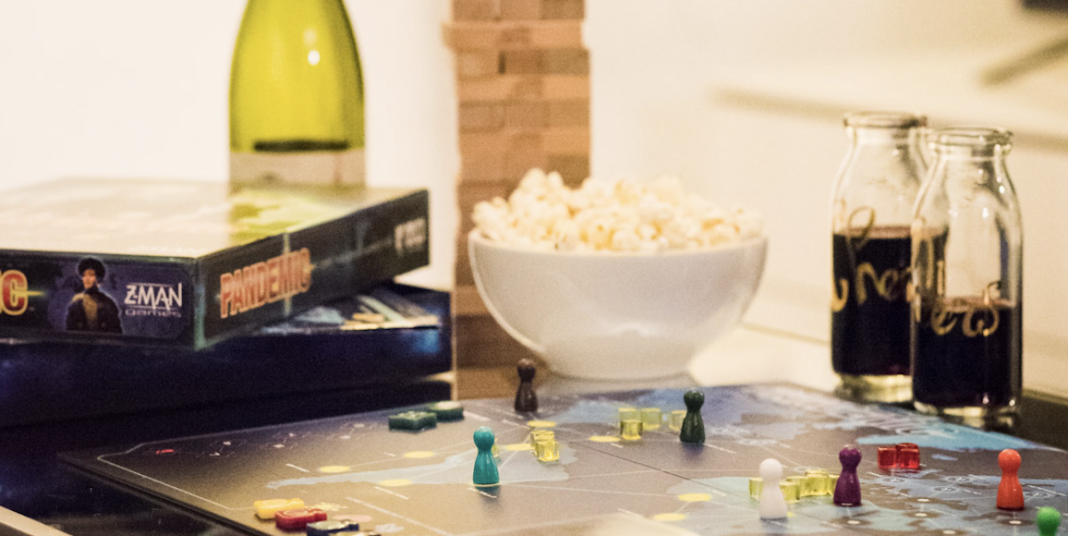 In a world where we center ourselves around phones and screens, a change of pace is always a good thing. Whether you love game night because it sparks great childhood memories, or you’re just a downright competitive beast who welcomes any opportunity to win (no shame) the holidays are the perfect time to bring out some fun…AND a little (or a lot) of spiked eggnog.

The TME team are no strangers to game night so we’ve rounded up some of our absolute favorites for adults. Some require a little critical or quick thinking and others are just plain entertaining. Either way, if you’ve got the right crew you’re in for a good night.

Watch Ya’ Mouth – I saw a video on YouTube and was like “yesss….this is perfect.” I mean, you look hilarious right off the bat and you think it’ll be easy but then the phrases they make you say sound ridiculous. Lots of laughter and easy to play without reading a ton of directions and rules.

Heads Up! – To me, the most important thing when playing games is laughter…I want them to make me laugh. The Heads Up! App is awesome because you can buy a ton of different categories that fit the personality of the group…and it automatically records a video that you can watch (and even save if you want to) over and over again. Some of the replay videos have brought us to tears.

Pandemic – This is an epic strategy game where the entire group of you work together against the game itself (SO good for bad losers).  The premise is that diseases are breaking out across the world, and you’ll have to work together to stop the spread, find cures, build bases, and eventually eradicate the diseases and save the world.  Warning:  it’s HARD.  Like…..you’ll probably lose the first game.  Maybe even the second or third.  We played our first round at the most basic level and the game crushed us.  Diseases broke out worldwide – WORLDWIDE.  Granted, we were playing with Pax and Raines at the time, but still.  We’re all trying to carve out some time for another round.  Mike, Raines and I are obsessed.  (Pax, 6, doesn’t care.)

Forbidden Desert – Similar to Pandemic, but older.  This game is still challenging, but after a few rounds we got the hang of it and were finally able to beat the game.  However, this one might be good if you have kids who like a challenge….

Anomia – This is a card game for quick thinkers.  The premise is simple:  everyone flips over a card.  If two players have matching symbols, they “face off” by blurting out – first – an example of the category printed on their card.  For example, if the card says “WEBSITE”, you can blurt out “The Mom Edit!”  Sounds easy, right?  Well….the game is so fast paced, and by “winning” a round you immediately reveal a new symbol pairing which prompts another round, so there’s really no downtime for anyone.  Cards are flipping, people are yelling random things “lucky charms!  fitzwater – no!  I mean Secretariat!” and suddenly you are looking at a card that says “COLOR” and all you can come up with is “GRED!!”  It’s like mom-brain on steroids.

Reverse Charades – Love a game of charades (I blame my years in high school theatre). It’s just a high energy game that makes for a lot of laughter. This one is different, too, because you have the whole team act out something for ONE person to guess. HILARIOUS.

Cards Against Humanity – Hilarious (maybe slightly irreverent) and if you want a to bring everyone out of their shell, play this game.

Code Names – I’ve never played this but it sounds pretty awesome. With 2-8+ players you have to be the first team to reveal the secret identity of 25 agents (with the help of 2 rival spy masters/team captains). The first team to make contact with all of its secret agents, wins. Definitely one I’d try out with my friends.

A to Z – This game is hands down my favorite and best to play in a group. You’re given a small handheld electronic board with each letter of the alphabet and you break into two teams. When you have the board, you’re given a random category. You have to then think of one word in that category (each starting with a different letter from the alphabet) before time runs out. The next person you pass it to is on the opposite team and at the end of your game the board tells you who won.

Mad Gab – This a pretty hilarious game. Each player has to read verbatim what’s on the card and guess the common phrase they’re saying. But it’s insane how tough it is while you’re looking at completely different words.

Apples to Apples – I hate strategy and stressful games, like, loathe them. But, I married into a SERIOUS strategy game family. They play Cribbage like their very survival depends on it. I just sit to the side with my knitting and my non-competitive nature and smile at them. But I DO love a good laugh with friends and family, of course, and I adore word games for this. Pinky’s family introduced me to Apples to Apples a few years back and it’s become our absolute favorite. It’s most fun with people who get your sense of humor, but can be played with anyone. From seven cards, you choose the best ‘match’ for the lead card and a judge chooses which anonymous answer he/she likes best. There are wacky combinations that can arise and you can either play the literal route or the comedic route with your answers. I also just found an add-on pack of cards that includes updated topics like “Mommy Bloggers” and “Hashtags.” Added. To. Cart.

Kinder Perfect – Like Cards Against Humanity for parents. “Turn the everyday pain of parenthood into an excuse for mommy juice!” Sold.

Christmas Drinking Game – But this one might be my favorite for the holiday season, or anytime really. All you need is a Santa hat, perfect for lazy ladies like myself.

Ultimate Werewolf – Officially my favorite family game night game. I absolutely love this game for all ages. Werewolves are picking off villagers one by one at night and it’s up to the villagers to work together and figure out the who are the wolves masquerading as innocent villagers before they’re all gone. It’s so fun to play with family: kids and adults alike, just when you think you have someone figured out, they surprise you! Plus, every player gets to actively participate by receiving role with special powers: the Seer, the Doctor, etc.

5 Second Rule – I am so so excited about this game, although I haven’t played it yet. 5 seconds to name 3 things in one category, it seems like it would be easy but with only 5 seconds to speak, players are left tongue-tied. These think on your feet games like Charades, Taboo and Pictionary are my favorite, I almost wet myself from laughing at least once every game.

What are your game night favorites? Leave us a comment below!