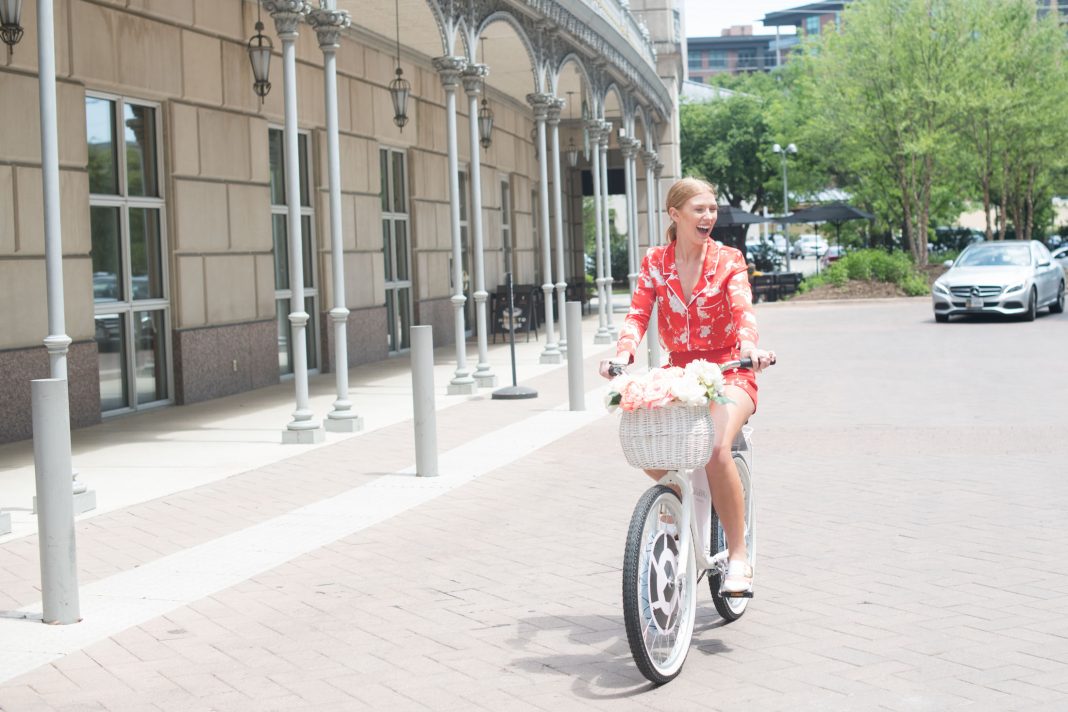 Good morning!  I’m writing this from the lobby of the Crescent Court Hotel in Dallas.  Scotti, Gwen (looking gorg on the bike) and I are here for RSTheCon, a fashion blogging conference.  I’ve been going for five years now (whoa), and it’s been reallllly interesting to watch fashion blogging grow.  As you might imagine, the people watching is seriously fun.  There’s a fair amount of peacocking and ridiculousness, but I’ve always been inspired by those who wear their fashion fearlessly, so high-freaking-five to the peacocks.  Keep it up.

Per usual, everything I packed is black, navy, white or nude.  I did bring a certain red dress that I may-or-may-not wear.  WE WILL SEE.  Normally, I’d rely on Scotti to do our peacocking for us, but she’s in that just-starting-to-show pregnant phase so her wardrobe looks like mine for once.  (Except for her eight pairs of shoes.  EIGHT.)  We’ll have to rely on Gwen.  True to form she was in dressy trousers last night, but they were palm print, had a matching crop top and the whole thing was v. exciting.  Way to represent, Gwen.

You can see what we’re up to on my IG (@shanachristine).  Actually, no.  You’ll see sporadic and wildly random snippets of what we’re up to and outfit photos maybe.  #nopromises  It’s just as likely that I’ll post pics of the boys with crying comments about how much Mummy Misses Them with super annoying hashtags like #blessed #boymom.   A much better bet is the TME IG (@themomedit) that Gwen has taken over – she does a better job.  And….wait a sec….just as I suspected:  Gwen already put stories up from last night.  I have a few pics of the palm-print pants.  I’ll have her throw those up on IG as well.

Ok. Onto our usual nonsense….

These shoes are not the same.  I’ve been wearing this pair of Steve Madden heels (in black leather) for years.  They are comfortable, cute, and go with everything.  But I wanted a nude pair.  Instead of Steve Madden, I bought Sam Edelman’s version of the same shoe and WHOA.  The Sam Edelman Patti sandals are much more comfortable.  Like…no contest.  It’s basically the only shoe I’ll be wearing all weekend (an extreme sport, fashion) so I’ll report back, but after the first night they were a dream.  I’m thinking of buying them in black, too.

Could this be the most flattering piece ever?.  There’s something about this Madewell romper that haunts my dreams.  The perfect framing of the….ahem, ‘girls’, the print (mixed stripes and florals), and the effortless vibe, despite the fact that it is a statement piece.  The reviews are off the charts, too.  They’re sold out in my size, but someone try this baby on and report back.  It just looks so….GOOD.

Sephora Sale!  And perfect timing – I just ran out of this Bobbi Brown eyeshadow stick (in sand dune), which I use daily to add depth without looking like I’m wearing anything at all.  You can see how I’m use it here.  I need a foundation refresh (my favs here), my go-to smokey eye chubby stick is almost gone (I get the ‘smoldering brown’ – Scotti shows me how to use it here), and I’m also seriously tempted by that Dyson hairdryer.  But for the real, makeup-artist-approved list of Sephora must-haves, check out Scotti’s post here.

What’s in the newsletter this week….in honor of Earth Day, we have a few of our favorite gardening toys for kids.  Think worms, tools, scatter seeds….and a seriously cool outdoor bluetooth speaker.  (Raines can’t be the only kid who likes to play teenager, moodily drawing outside to music, right?)  Subscribe here (and be entered to win a $200 gift card to anywhere – we pick a winner every month).

What is the Senate policy on duckling onsies?  Apparently, they’re allowed.  I loved Tammy Duckworth’s tweet before bringing her infant daughter onto the Senate floor to vote.  Wednesday was the first day that Senators were allowed to bring children (under the age of 1) onto the Senate floor. The New York Times has the full scoop, and it’s kiiind of hysterical.  Like…Senate dress codes for babies. In any case, I totally agree with Mrs Duckworth:  “it’s about time.”

“I didn’t know.  I didn’t know.”  The DC Police department has a new training program:  every police officer is now required to do a day-long intensive at the African-American History Museum. According to the Washingtonian, the idea is that “cops who dive into black history might better understand the communities they serve”.   So far the approach seems to be working – cops who were initially wary are really opening up, and some are coming away with tears in their eyes.  I found the Washingtonian’s article on the program totally worth a read.

What happened to Brotherly Love?  I’m sure you’ve seen by now that two black men were arrested in a Philadelphia Starbucks because they were waiting for a business partner.  I myself have been to that particular Starbucks numerous times, have used the bathroom without buying anything, and have waited there for friends.  Shockingly, never once have I ended up in handcuffs. NPR’s article on the aftermath, including Starbuck’s response (the COO of Starbucks is an African-American woman with a 23-year-old son), and a few additional examples showing that type of incident happens much more often than we realize is illuminating.

Ok.  Now back to a little frivolity and fun.  Enjoy your weekend…. 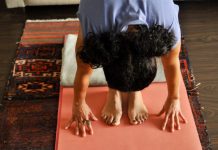 The Easiest Way To Yoga (Hint: At Home)