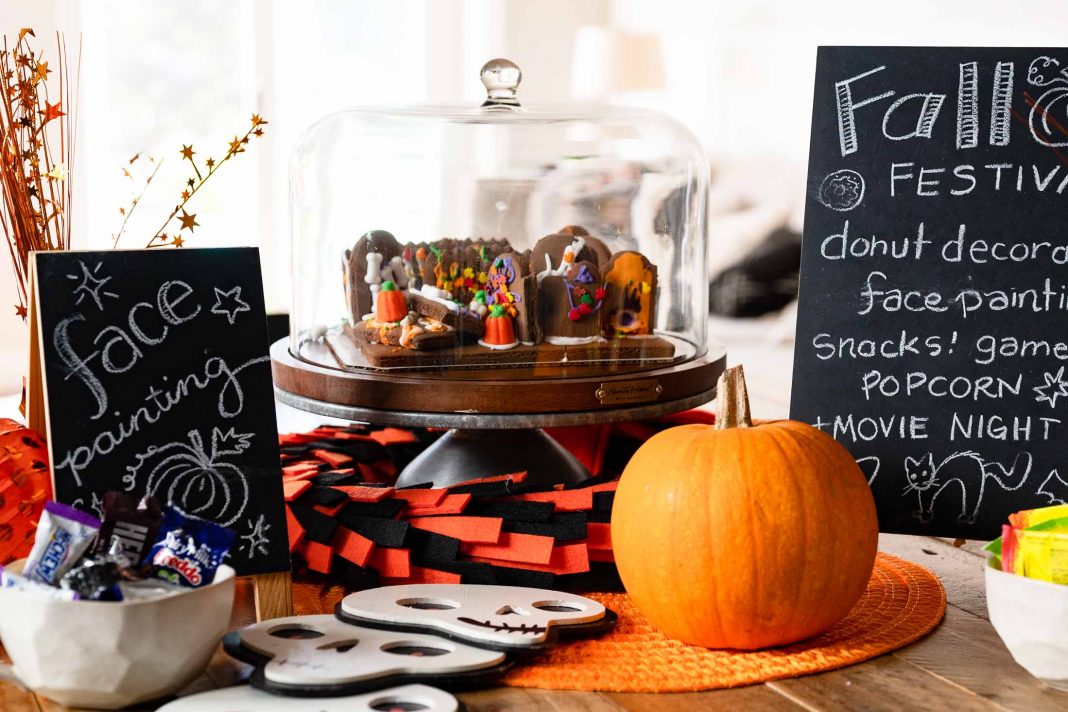 Scotti has talked about it. Shana has talked about it. I think it’s been pretty well-established that Halloween is going to look…a little different this year. Maybe a lot different, depending on where you live. In our neighborhood, there’s been some discussion around people putting tables at the end of their driveways and monitoring the kids from lawn chairs — which would essentially remove some of the risk associated with kids jockeying for position along narrow walkways, and Candy Hander-Outers coming into close contact with hundreds of trick or treaters. (Hundreds is no exaggeration — our neighborhood is, in normal conditions, a Halloween hot spot.) I like the idea enough to…maybe let Lana jump on the bandwagon? With masks, of course. But there’s a big question mark surrounding how many households will participate. So, much like S, we’re metering expectations and setting the bar real low.

The flip side is that I feel just a little more pressure than usual to celebrate Halloween in a big way within the confines of our own household. This past weekend, we joined forces with our Bubble Friends and spontaneously threw the kids a DIY Halloween Festival that was pretty spectacular. We split the festival activities between our two houses, figuring that the change of scenery midday would be good for everyone — and it meant that each family only had to do half the work and half the clean-up, which kept things VERY low-key. The most effort I put into the whole thing was making a paper banner that read “Trick or Treat” to hang over the dining room table, which I made while we caught up on SNL and The Boys finale, so I really can’t even complain about that.

Below, I’m giving a quick recap of the extremely low-maintenance games and activities we pulled together for the “festival” — AND I’m in the process of putting together another post featuring 10 genuinely doable Halloween-themed recipes to up the Halloween ante in your house even more over the next week. (Spoiler alert: we’ve already earmarked these Candy Corn Rice Krispies Treats, and these Leftover Halloween Candy Cookies were such a hit last year that we hoarded away dozens in the freezer for on-demand baking all winter long.)

Couple of notes: The “centerpiece” of our table, pictured above, was a graveyard cookie kit that we completed earlier this month — similar here, cake stand here; and we’ve used these chalkboard signs for every party and event we’ve hosted for the past five years. They always add an element of oh, this was intentional and planned!! even when we’ve cobbled things together at a moment’s notice. The orange decorations were leftover from past birthday parties and an SF Giants-themed baby shower we threw for my cousin. Use what you’ve got, folks!

Also: this was for a group of kiddos (that’s being generous…there were three kids, ha) age 3-6, but I think most of the activities would still be fun for slightly older kiddos with a few modifications.

Forgive this terrible photo (it was taken as a screenshot from an incredible video that I will treasure indefinitely), but I have to lead with this one because it was such an undeniable hit. We set up 10 cups at the end of a table (a la beer pong, but with water, of course) and gave each kiddo an eyeball ping pong ball. When each kid successfully sank their ball 3 times, they got to smash their parent in the face with a whipped cream “pie.” (Just a paper plate loaded with whipped cream.) You can make this more or less challenging depending on the kid’s ages — keeping the cups versus removing them as they’re hit, or increasing the number of times they have to sink the ball. I can’t even communicate the look of exhilaration on Lana’s face when she learned she’d get to smash Chris in the face. Core memory stuff, for sure.

This was great — so easy and fun, and the kit we used comes with fun stencils (which we used for the kids), but the grown-ups also had a ball free-handing designs onto each other. (Ok, I had a ball. I not-so-secretly want all the tattoos, but I’ve yet to make the leap.) Only downside is the henna paste has to dry for 30 mins, which brings me to…

A simple craft that’s low on required materials — just black construction paper, tape and self-stick googly eyes (which are worth having around for…everything). Makes for a good photo op, and afterwards the spider hats became halloween decorations around our house (there’s currently one hanging from the pendant light over our dining table). Easy one to pull together while the henna tattoos dried.

Also super easy — but then again, that’s the theme here. Just small sugar pumpkins from the grocery store + rock paint, which dried surprisingly quickly. (Ours was leftover from another project, but this glow-in-the-dark paint would be so cool for loads of Halloween projects and is super-affordable with free Prime shipping.) Another perfect, mellow activity for the kids to do while their henna tattoos dried.

Another terrible photo, but you get the idea. We baked off donuts the night before (I used this recipe, which happens to be vegan and produces donuts that taste almost exactly like Whole Foods’ vegan donuts — the recipe makes eight donuts if baked in a donut pan) and gave each kid a decoration station (cookie sheet) with a paper plate, a ramekin of the glaze, and little silicone cups full of jimmies, halloween sprinkles and my favorite Halloween hack of all time, edible candy eyeballs. (We’ve been using them to spookify everything.) Since the donut glaze needs time to set, we put them aside until after dinner — and since there were so many other distractions, the kids were actually ok with waiting. (Love it when that happens.)

So many options here. We drew a few different designs on the back sliding doors with these chalk crayons, which are always a novel hit with the kiddos. Then we used these sticky, stretchy skeletons to play Tic Tac Toe and a blindfolded game of “Pin The Skeleton on the Gravestone” that we made up on the spot. The sticky skeletons were great since they became party favors of sorts, but you could just as easily cut out paper shapes for the window games and slap some painter’s tape on the back.

We had this inexpensive balloon animal kit laying around from a past birthday party, and I studied YouTube just long enough to learn how to make a dog, a giraffe, a daschund (notice these are al variations on a theme, because lazy) and a couple different types of swords — and amazingly our kids were more than satisfied with that selection. The swords, in particular, were a huge hit. Did I giggle like a gutter-brained adolescent every time I inflated a balloon? Why yes, yes I did.

Another huge hit, despite that fact that none of us are pros when it comes to face-painting. We gave the kids somewhat limited options to choose from (full-face pumpkin, frankenstein or skeleton; or a small jack-o-lantern, witch hat, or black cat) — and then, inevitably, the kids wanted to paint our faces, too, and since Chris had already taken one for the team in the form of cream pies, I couldn’t say no. It was actually pretty dang cute watching Lana concentrate on something so hard — and in the end, I only sorta looked like the kid who fell asleep first at the sleepover, ha. We used these water-based face paints (whoa, on super sale!), which are easy to use and relatively easy to remove (the green was a wee bit stubborn), but I remember using this Klutz kit as a kid and loving the ideas provided in the accompanying book.

Have you done any of these little scratch crafts before? They’re surprisingly calming and satisfying. We put these Halloween-themed scratch cards in our boo bags and had plenty leftover for the kids to use for the festival, too. Each pack comes with 72 cards, strings to hang them, and 20+ scratch sticks. Even the adults took the time to sit down and knock out a couple.

This is a bit more (OK, a lot more) of an investment, but when we re-landscaped our yard, part of the plan was for regular outdoor movie nights, so Chris researched the heck out of outdoor movie projectors and screens. We landed on this projector, which works really well in outdoor settings, and this massive screen, which is designed for either front or rear projection (basically in front of or behind the screen), so we can use it in a variety of spaces, inside and out. (For what it’s worth, this setup would be a great luxe gift — and feels especially appropriate for a holiday season in which we’ll all be spending more time at home than usual.) For seating, we just plopped the kiddos on a big blanket, bundled up with fuzzy throws and a pile of our down jackets, and the grown-ups sipped cocktails around the fire. (Still loving our firepit — more details in this post of favorite Amazon purchases.)

Last, but not least, I have to give a nod to these little stick-on bats. They made our living room look spectacularly festive — while also being extremely tasteful. And I have to admit, I took a great deal of pleasure in positioning them just so. (A 30 minutes well spent, in my book.) I only used about half of them here, and I used painter’s tape on the back to be mindful of our walls, but Amy mentioned that she used the provided adhesives and they removed just fine. Possibly the best, most impactful $9 we spent all season.

In the end, our kids were wild about each activity, no matter how simple, and it was such a fun excuse to get a little craftier than usual (but not by much). And friends — if you have to choose only one idea to make some serious Halloween memories this year? Find an excuse — any excuse — to smash someone in the face with a whipped cream pie. So much freaking fun.

p.s. For more halloween ideas, see how Scotti is celebrating the holiday with her family in this post. 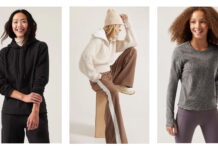 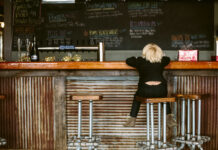 13 Overlooked Gifts For Kids Who Have Everything 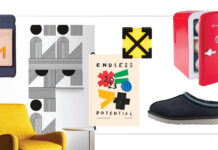 My Favorite Etsy Sellers To Stock Your Dress-Up Box