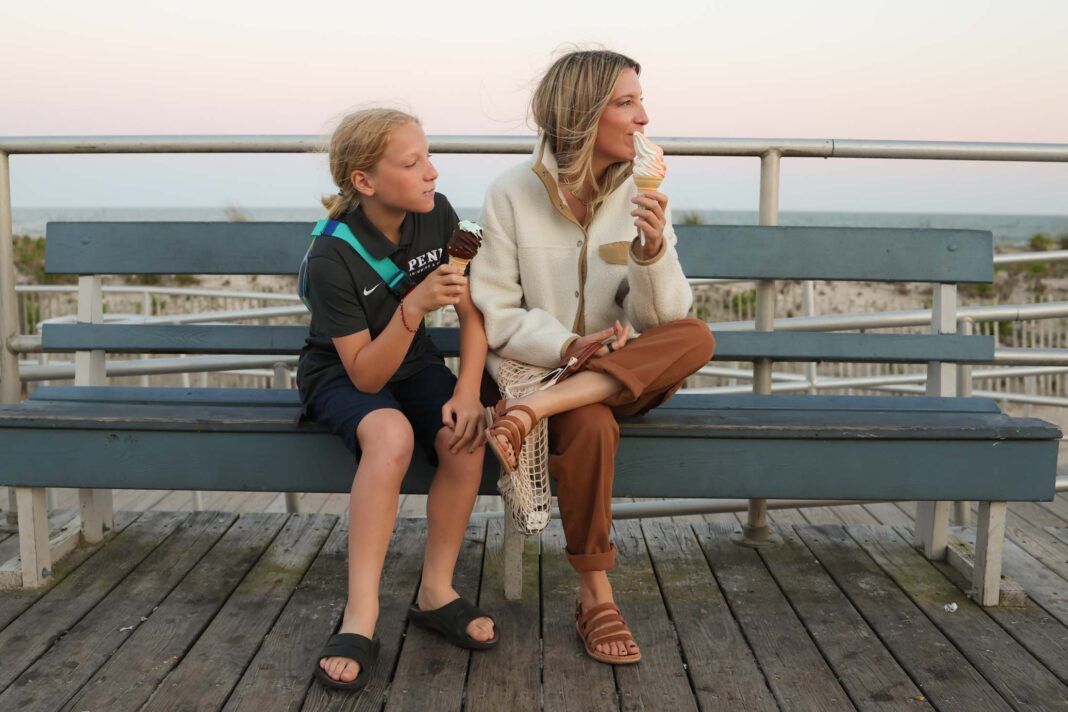 The last time we drove back home to Michigan (from Philadelphia), we stopped somewhere in Ohio for coffee. I did one of those Starbucks order-ahead things, we drove up, Mike pulled the car over, and I ran in to grab our coffees. There was a man outside, not affiliated with Starbucks, just some middle-aged white dude who would look everyone in the eye as they went in and say, “GOOD MORNING TO YOU”.

He’d do this whole walk-in-a-slow circle thing, appraising. And if someone didn’t respond, he go, “HEY! I said GOOD MORNING,” staring even more intently at them. The whole scene felt rather threatening. His faux politeness seemed to have a sinister undercurrent.

And that was before I realized he had a gun.

So a random stranger, outside of a Starbucks, was wearing a gun strapped to his hip while demanding everyone greet him with “good morning”. And that weird slow-circle-walking that he was doing was merely to better show off his gun.

Frankly, I was terrified. His behavior was wildly inappropriate. What if he decided he didn’t like someone? What if he decided that something had gone wrong? And seeing a gun in that setting – in a random Starbucks with my kids in the car, a gun not attached to a trained professional whose job is public safety – I was scared. This moment did not feel like one that should happen in a civilized society.

And, based on the decisions that have come out of the Supreme Court this week, I’m very concerned that this is where we’re headed.

So.Informed has a pretty good break-down of the court’s recent ruling on guns. And Liz Plank has the best (and funniest – is it funny? I can no longer tell) reminder that there are still ways to get an abortion in red states (set up a forwarding address in abortion-legal states, then order the abortion pill to those addresses), and it’s important to spread the word. But please consider donating to Abortion Funds, an organization that is working to ensure that every women has equal access to healthcare options like abortion.

But I think it’s also important to remember that, “Women are not without electoral or political power. It is noteworthy that the percentage of women who register to vote and cast ballots is consistently higher than the percentage of men who do so.”

As my friend K so eloquently put it, that’s one of the only sentences in the Dobbs v. Jackson opinion (the one that overturned Roe) which doesn’t infuriate.

Our political power matters. Let’s use it.

We have BIG plans. The Nordstrom Anniversary Sale is coming up, and we’re always trying to find a way to give those of you who care complete coverage…without annoying the rest of you. I’ll have more details soon, but the key is going to be our newsletter. If you sign up for “All things Nordstrom Anniversary Sale” in our newsletter, you’ll get an email whenever we publish an NSale try-on article (they look like this). Even better, this group will also get special newsletters that are basically sneak peeks before our try-on articles publish to the blog. Which might matter, considering the speed at which certain pieces sell out. Anyway, if you’re into this type of stuff (as well as some behind-the-scenes workings), the “All things Nordstrom Anniversary Sale” is your best bet. Right now, we don’t plan on starting these special newsletters until shopping starts (July 6), and then we’ll likely be sending several emails a day, but only for the first few days. After that, our special newsletters will either taper off dramatically or stop altogether, so this is not a long-term thing. Bottom line? Sign up for our newsletter, and/or check your newsletter subscribe preferences (they’re at the bottom of every newsletter), to make sure you’ve signed up for our extra Nordstrom coverage. And, of course, these preferences can be changed at any time.

Linzi was right. I’ve been rolling my eyes at her Fitflop obsession for years now, and, I, well…I bought these. In beige. And they’re fabulous. Like those Amazon cushion slides, but wayyyyy more supportive. I’m now on the hunt for more, and Linz swears that Fitflop.com has the best selection.

Two words: Low. Rise. I am, as I type this, wearing FRAME’s low-rise cargo pants, and they are so exactly like a pair I wore in the early 2000’s that putting them on felt like coming home. They’re super soft, comfortable, and the color is gorgeous. Fit is TTS. For a more affordable version, try Free People’s low rise utility pant.

My new sunnies. I just picked up these Quay sunglasses for $55, and LOVE them. They look just like the pair of Isabel Marant’s I’ve been coveting.

The gorgeous Venezuelan. One of my friends sauntered out to the pool wearing this Amazon dress as a cover-up and looked AMAZING. Sidenote: she always looks amazing. Still. Worth a try.

It’s running season…and these socks are arguably the cutest running socks I’ve ever seen. They’d be especially cute with Hokas.

Seems appropriate. For Father’s Day, we all met at the park for a game of pickleball (apparently we are that old), and noticed all of the dads were wearing Vuori shorts. Like…all of them. The styles varied somewhat, but if anyone cares, Mike’s favorite is the Aim Short. It looks wayyyy better IRL than on the model.

I’m gonna run. We’re at the shore this weekend, and the waves are calling. And ps. you guys were right about this suit. 😉

Hang in there, Gang.