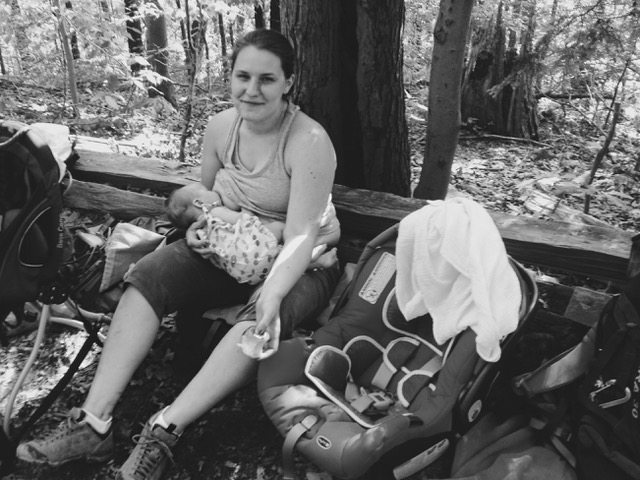 This essay from author Sarah Lemon is about rock climbing and motherhood. It’s also about pre and postpartum depression. Sarah addresses the thick cloud of depression that hung over her last pregnancy and four-year battle with an eating disorder, yet her essay is beautiful and hopeful, too. Through the “riotous upheaval of motherhood” and life — raw and real — she found her way. Climb on, Sarah. Your words are always such a gift.

Sarah Lemon is the author of Done Dirt Cheap and Valley Girls, Some of you may remember Sarah from our 2017 interview and longtime readers may remember her heartbreakingly beautiful essay in 2014 on finding her own style.

It begins before you are pregnant.

You open your curtains and move your bed because your mother told you lying in the moonlight will regulate your cycles. (Just mine?) You lay on your back with your feet on the headboard after sex for thirty minutes. You drink teas. Take tinctures. Drugs. Hormones. The child isn’t in you and you are occupied already by the things that help you whisper life out of your womb. You are occupied by the grief when you miscarry, the emptiness a palpable thing. You are occupied by the ache for motherhood in the flesh, instead of only in your heart. You are occupied by shock when—planning it or not—you find you are pregnant.

It starts with thinking this child is simply an extension of yourself and the work (or the wildness) that brought about the occupation of your womb. Quickly and thoroughly that is proven false. This baby has its own will and you are its executor. You eat the things the baby will tolerate. You fall asleep at your desk because the baby is growing. You cannot remember your doctor’s appointment because your blood is literally being rerouted to your womb. You are occupied by another human being, and it is always a blessing, but sometimes so maddening that you are never able to be fully alone.

During pregnancy, I was never at peace in my body the same way I was before the occupation began.

My daughter was my last, the third, and the pregnancy that occurred easily and the way I thought pregnancy happened. But in this healthy, wondrous, —finally— easy pregnancy, the veil of prenatal depression was pulled over my life. It’d been too short a time, maybe, between this pregnancy and postpartum depression that came with my middle child. The way this affected me most was the discernible feeling of someone touching me—eternally. It was the two young boys on the outside, and a daughter on the inside, touching me always. This is a truth in pregnancy, but this time, I was aware of it in a way only depression can bring.

During her gestation, I lived in a tiny cottage on the edge of the Chesapeake Bay. Without fail, when I would feel the pressure of her sinking low, pressing hard in my hips and cervix, I would go to the window and find the tide was pulling out. I’d wake in the pre-dawn hours with only the foghorn for company, filled with an unbearable fullness, and go outside and see the tide had pushed the creek over the dock, and the waters of my womb with it. All that winter, I sat at my desk, listening to the wind pushing whitecaps and stirring the dried cordgrass of the salt marshes as I felt my daughter turn and tap.

I could barely hold onto my sanity at the immense pressure of feeling occupied. That even the moon and the sea pressed on me with this knowledge. I wanted peace. I wanted this baby, but I wanted peace. In my mind. In my body. I limped towards birth, knowing there was an end to this.

And I found solace somewhere unexpected.

Here are the disclaimers: I was an experienced climber having a physically healthy pregnancy. Many experienced climbers continue climbing while pregnant, for as long as they are comfortable, paying attention to their softening ligaments so as not to overstretch them, and taking necessary modifications (top-rope, full body harnesses) as the pregnancy progresses.

Here is the claim: I was occupied by my baby and rock climbing made me feel as if I wasn’t.

I was never a good climber. I’m not the type. Instead, climbing became an important part of my life because I was so bad at it. It gave me a place where failure was not catastrophic. I know it’s confusing—isn’t falling and dying catastrophic? But my life had been unstable and chaotic and always on the verge of truly catastrophic, and climbing was the first experience I had where I could make a mistake and the consequences were almost normal.

I climbed until my belly got in the way—which for shorty me was around six and a half months. But climbing didn’t give up on me. I had a climbing trip planned for six weeks after my daughter’s birth and I held it out in front of me like a lighthouse on a treacherous coast.

During my delivery — the only one of three without drugs or pain killers — my husband and climbing partner coached me through each contraction with climbing visuals.

We didn’t plan it, that’s just how it happened.

Clip the draw, he’d whisper while we sat on the edge of the hospital bed.

I’d see myself on the sun-dappled sandstone, reaching for the draw and clipping it on the bolt. The trees were stirring around me. The coal trains echoing through the gorge.

Clip the rope, he’d say and squeeze my hand.

I didn’t think of the occupation. Of the tightening of my womb or what pain laid ahead. I only thought of reaching for the rope.

I was always afraid at this moment—the fear in climbing naturally folded up all my fear of labor. The breeze would stir and I’d see my shaking chalk-covered hands, fumbling to get the rope pushed through the gate.

Clipped, he’d say when he saw the pain ease from my face. The pain, but really the fear.

I’d open my eyes and breath. And we’d begin again.

Six weeks later, I did make that trip—with my ten pound newborn wrapped around me — I was still bleeding, leaking breastmilk, and still carrying thirty pounds of pregnancy weight. I had the all-clear to climb and in some strange sort of earth magic, I climbed the most technically accomplished route of my life. I finished the route, returned to the ground and began to nurse my daughter. I’ve never climbed that well again.

In the end, it was the loss of climbing that saved my mental health.

With the wisdom of time’s passing, I can look back now, over five years later, and see how vulnerable I was. How much I needed help. That that pregnancy was the beginning of a four-year battle with an eating disorder and clinical depression.* But recovery didn’t begin until I went back to the rock and found I couldn’t climb.

By that time, I’d gotten seven cavities and lost half the volume of my hair, but I still didn’t realize I had an eating disorder. I didn’t label it that or make those connections. I was severely depressed and torturously writing the book that was Valley Girls. But I didn’t know how much it had cost me until I tied in to climb, tipped my head and felt…nothing. The day was beautiful. The sandstone creamy and warm. I began climbing an easy, fun top-rope and I was sick and terrified, not of the climbing, but the gaping chasm of nothing.

I’m too raw, I remember saying to my husband when I bailed and sat in the dirt with my shoulders slumped. I’m too exposed everywhere to be this exposed now.

He’d untied my knot for me.

We went home and got professional help.

I haven’t really climbed since then, actually. I went on anti-depressants for the first time in my life. I went to therapy. I found help and was able to enter recovery from anorexia. My hair grew back. My teeth were fixed. And I finished my book about climbing without climbing anymore.

The sandstone waits for me though. I know it, deep in my bones. That’s the nature of mountains and climbing. They don’t need you, but if you ask, they will provide a way. Climbing isn’t a sport, it’s a journey. And sometimes the journey means you hang in your harness, head bowed low. The breeze stirs and you wait until your heartbeat calms and you are ready to face the rest of the journey. Then you brush off your hands and tip your chin.

Climbing. You call to your partner.

The encouragement comes back, thin on the breeze. Climb on.

*The child-bearing years are the most common for women to suffer from depression and eating disorders.

To read more of Sarah’s work (and I highly recommend it — I LOVED her first book), check out her latest book Valley Girls, the story of 17-year-old Rilla who ventures out to live with her sister in Yosemite National Park and sets the goal to conquer El Capitan. However, in order to climb, Rilla must learn to overcome herself first. 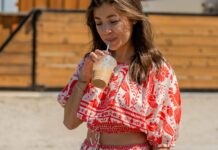 Found: A Versatile, Nursing-Friendly (!) Matching Set With All The Impact of A Statement Dress