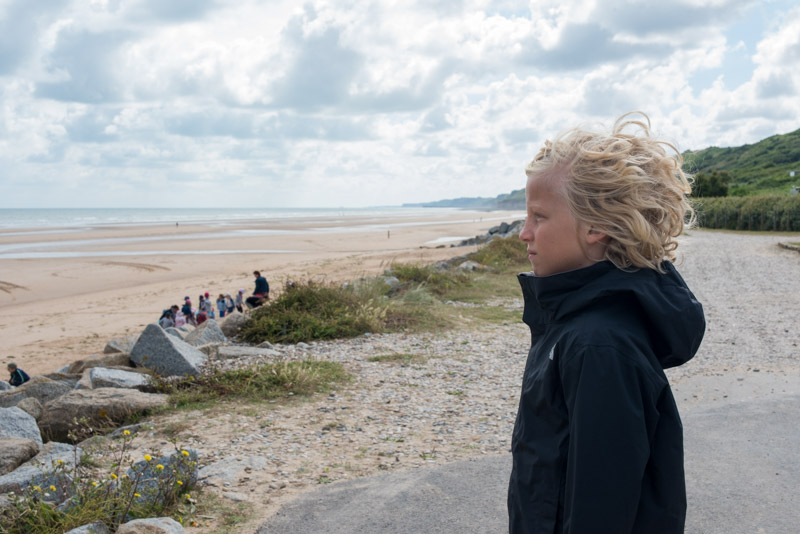 One of the highlights of our trip this summer was taking Raines (age 8) and Pax (age 5) to Normandy.  Our oldest is the type who tends to…focus on one topic, and for the last two years his focus has primarily been on World War 2.  We’ve watched countless documentaries, The Longest Day six times, visited battleships, war museums, even attended a World War 2 Weekend in Pennsylvania (which was amazing), and have, roughly, 15-20 notebooks filled with Raines’ drawings of planes, battleships, tanks, and general war scenes.  For a while there, bedtime stories were supplanted by his favorite resource guide, Weapons of World War II:  “The M18 Hellcat weighs 18.8 tons, it’s max speed is 50mph, the range is 105 miles on road, and there are 3 cannon in the turret, plus one .5 MG….”

I just can’t even.  A girl can only read tank specs aloud so many times.

But we dreamed of bringing Raines to Normandy.  So when one of our options for a house exchange popped up a mere 2 hours from the Normandy Beaches, we didn’t hesitate.

Guided Tour or No?

One of our biggest questions was whether or not we should book a tour.  I called around to several places, and, for the most part, I don’t believe a general tour is a good fit for young kids.  Most of the tour groups move fast, trying to see as many things as possible, and do a ton of talking.  The important thing we learned (and it was underscored by our visit), is that for the most part, the Normandy beaches are, in fact, gorgeous beaches.  Beaches that are fun to run and play and explore.  Dragging the kids from site to site with a bunch of adults trying to hear the tour guide didn’t sound like a recipe for success.  (Raines may have been fine, but his younger brother?  No.)

But Raines’ passion for the topic is so strong, neither did we want to miss out on the rich history.  In the end, we ended up booking a private tour with Overlord Tours (our guide was Alain).  For around $500 euros, Alain would pick us up from our hotel (at 9AM), drive us to the most kid-friendly sites (and talk history, of course), and then bring us back to our hotel around 5PM.  There was a break scheduled for lunch, and Alain totally understood that our tour “schedule” might get completely derailed based on how the boys were doing.

Booking a private tour was one of the best decisions of the trip.  Alain had photos to help illustrate what happened at each site, letters written by infantry men the day after D-Day (heartbreaking, raw, and wise-beyond-years, the words of a 19 year old boy the day after he survived Omaha Beach), and there were countless times Alain pulled the car over on a seemingly random road to point out where German cannon had once been poking out of a hillside, or the location of German bunkers.  In his description of the day, Alain would say in his charming French accent, “the boys were waiting in those transport boats, seasick, for hours-” or “the first wave of boys never got off the beach-“.

My little boys were both enthralled.  Mike and I were both humbled.  It was quite a day.

Our first stop was Longues-Ser-Mer, the only site that still has German cannon in the bunkers.  It was a really good way to get the kids engaged right away. 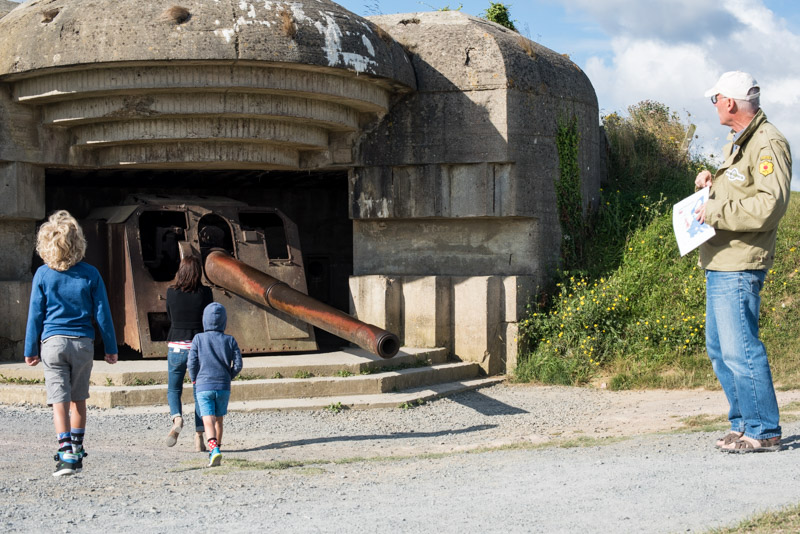 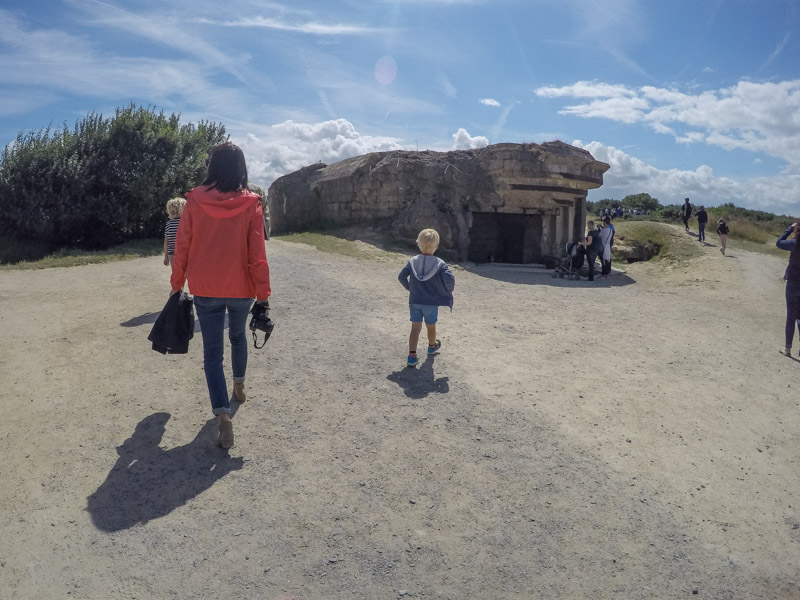 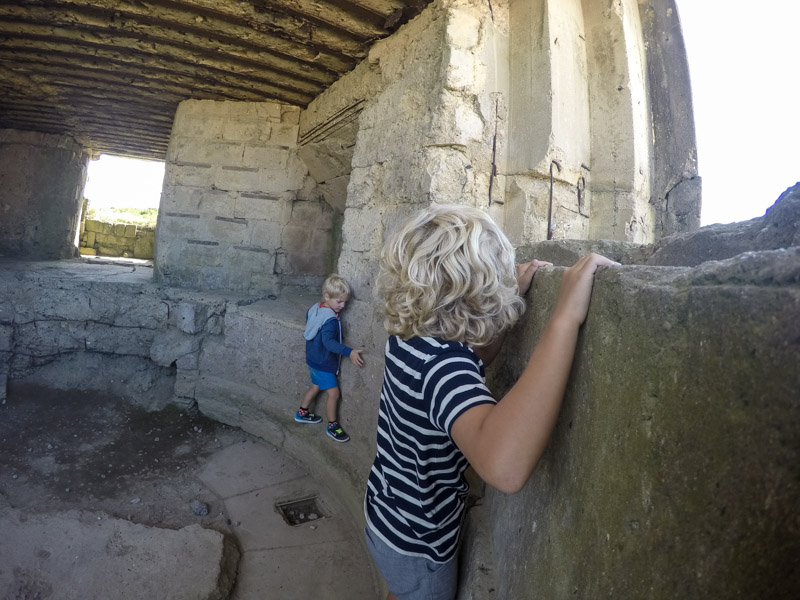 Our next stop, Omaha Beach, was the bloodiest landing site and is now….a gorgeous beach.  There are no German bunkers to see (unless you know where in the hillside to look), and virtually nothing on the beach that hints at the hell that took place 70+ years ago.   But up the hill, you can visit the American cemetery, situated on the exact bluff that so many boys failed to reach.  The museum at the American cemetery is filled with personal stories, and that, coupled with the acres of white crosses and stars of David, really helped the boys to understand that war ultimately means loss. 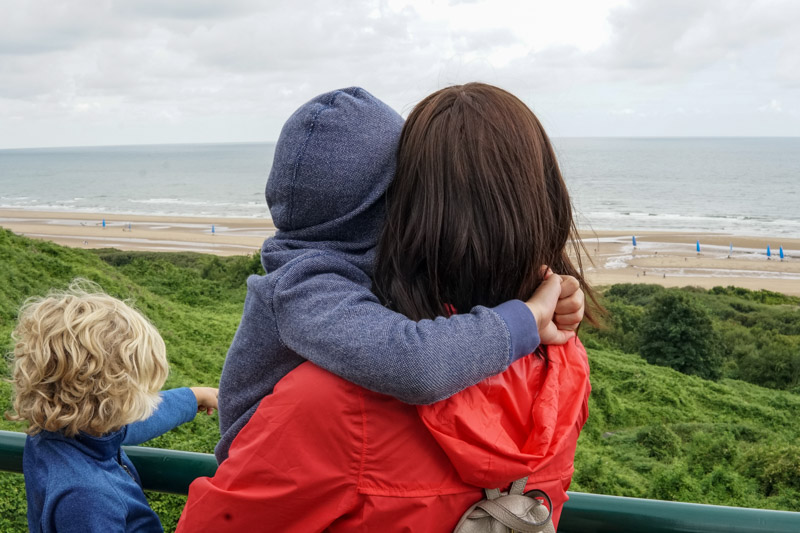 If ever there was a reason to go with a guide, it’s Omaha Beach.  As we stood on the beach, Alain described how the troop transports were in too-deep water and our boys too heavily burdened to be able to swim or move off the beach.  He explained that Rommel had built defenses and land-mines into the water, and pointed out exactly where the German machine guns were positioned as they waited for our boys to open the doors of the boats.  I’ve heard the word ‘crossfire’ before, but standing in that exact spot, you could see how desperate the situation, understand how tragic this landing really was.  Alain explained how our planes completely missed all German targets on Omaha Beach, and how the first wave of boys were taken down in the first 5-10 minutes…it was surreal.  And something we would’ve completely missed if we hadn’t been with a guide. 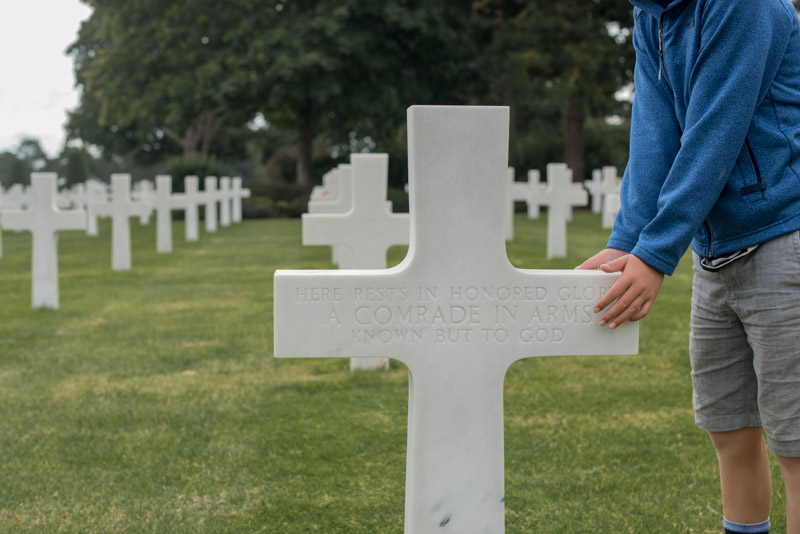 If there is one site to take the kids, it’s Point-du-Hoc.  This is the site of the Ranger landing – a very dramatic, cliffside climb into German strongholds.  At Point-du-hoc, the kids can wander through old German bunkers and play in unsettlingly beautiful bomb craters.  And if you are a Longest Day fan, you can go inside the lookout bunker that kicks off the movie. 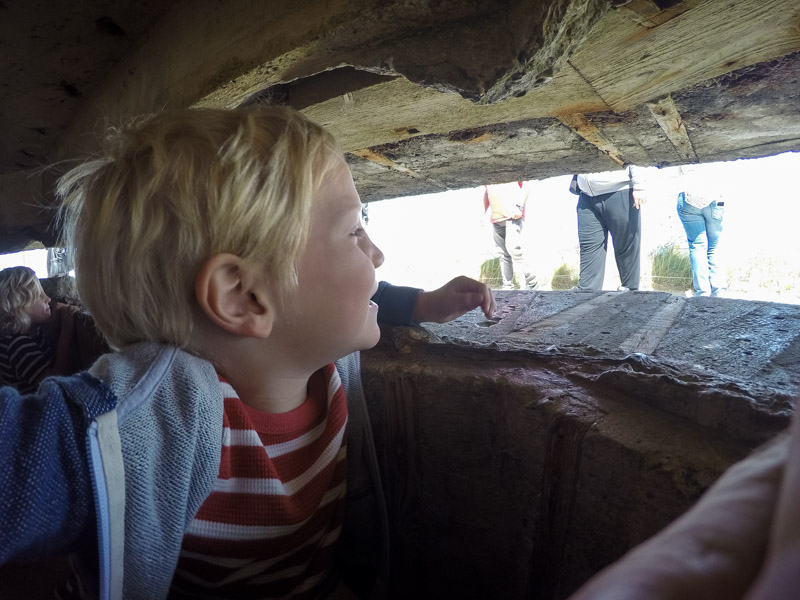 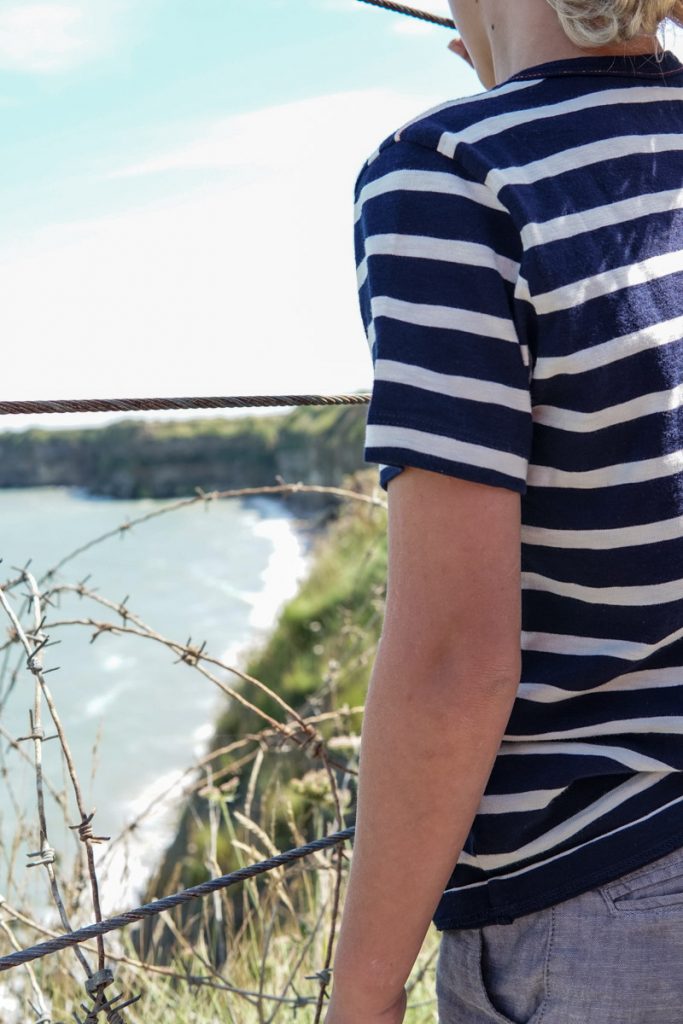 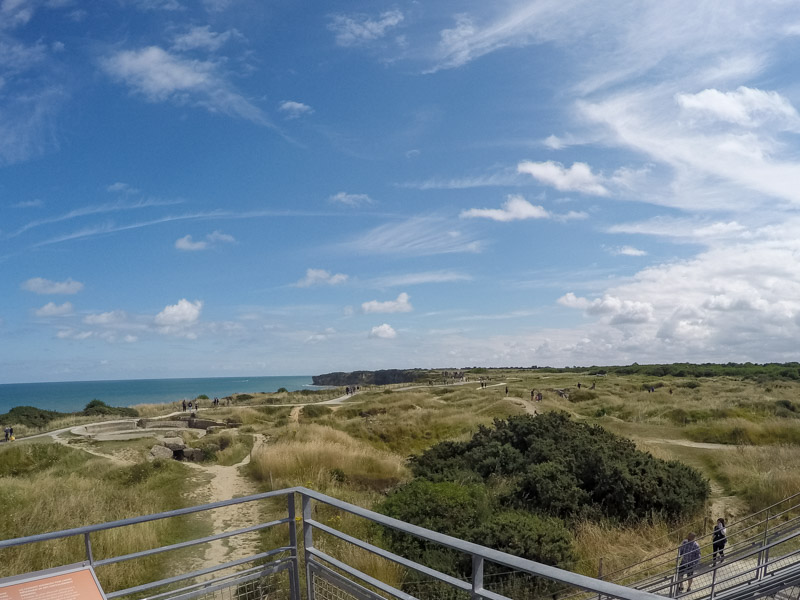 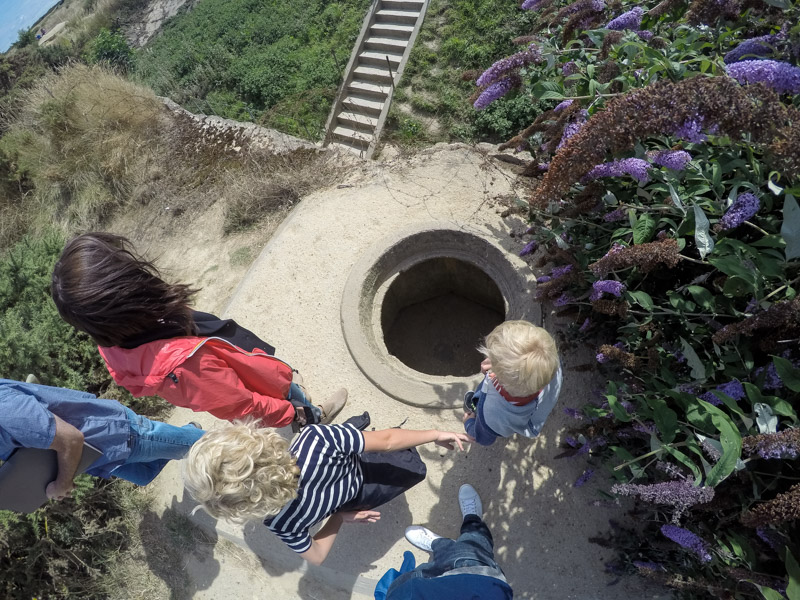 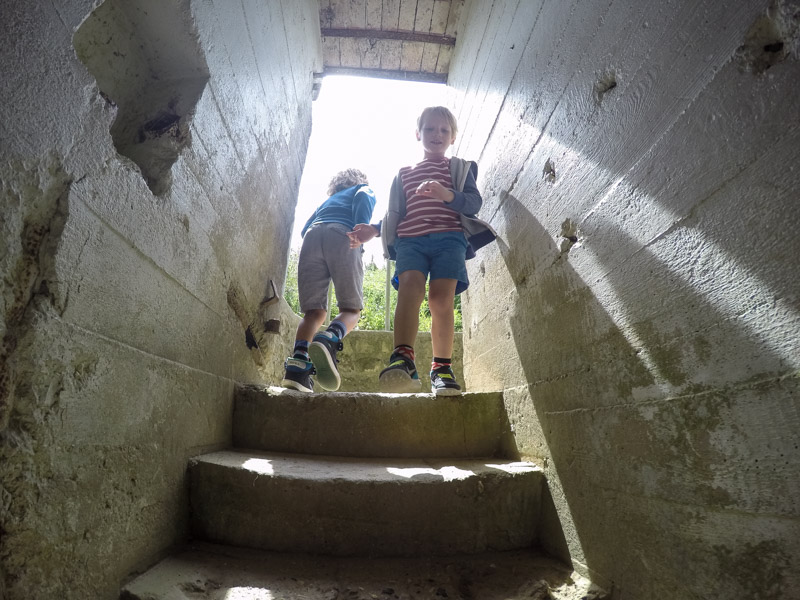 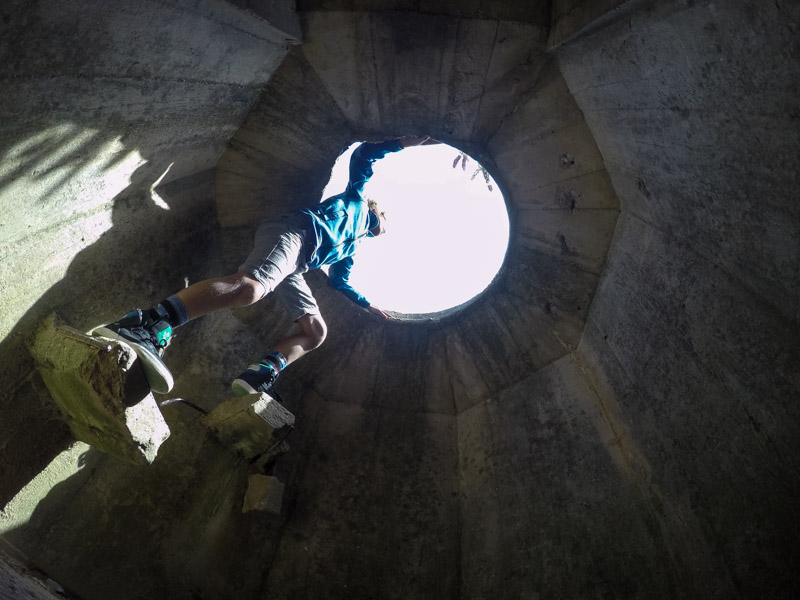 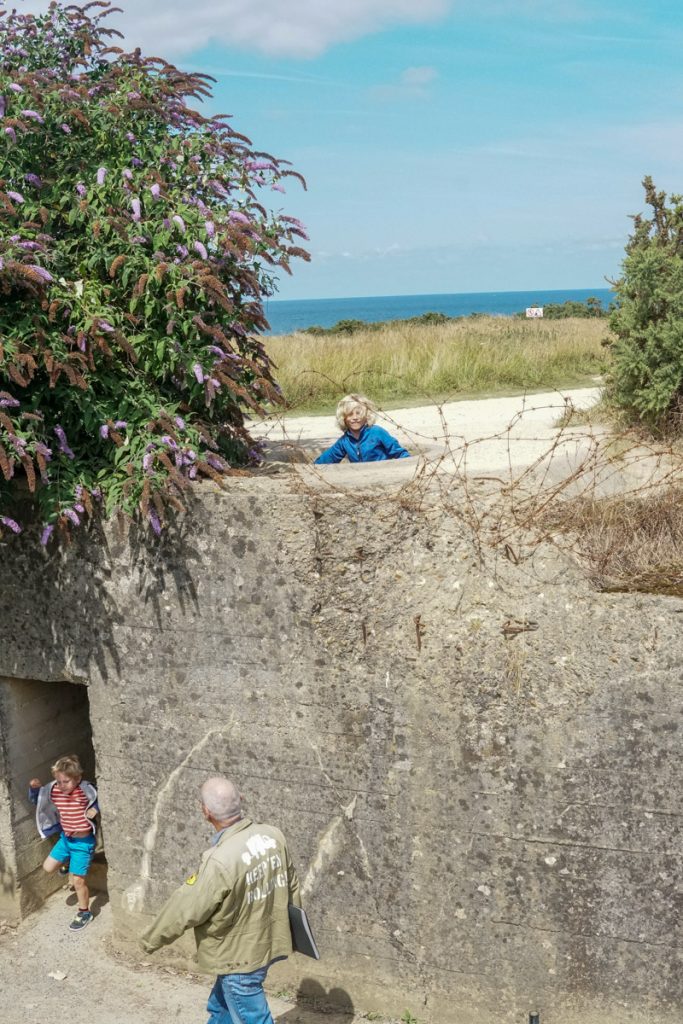 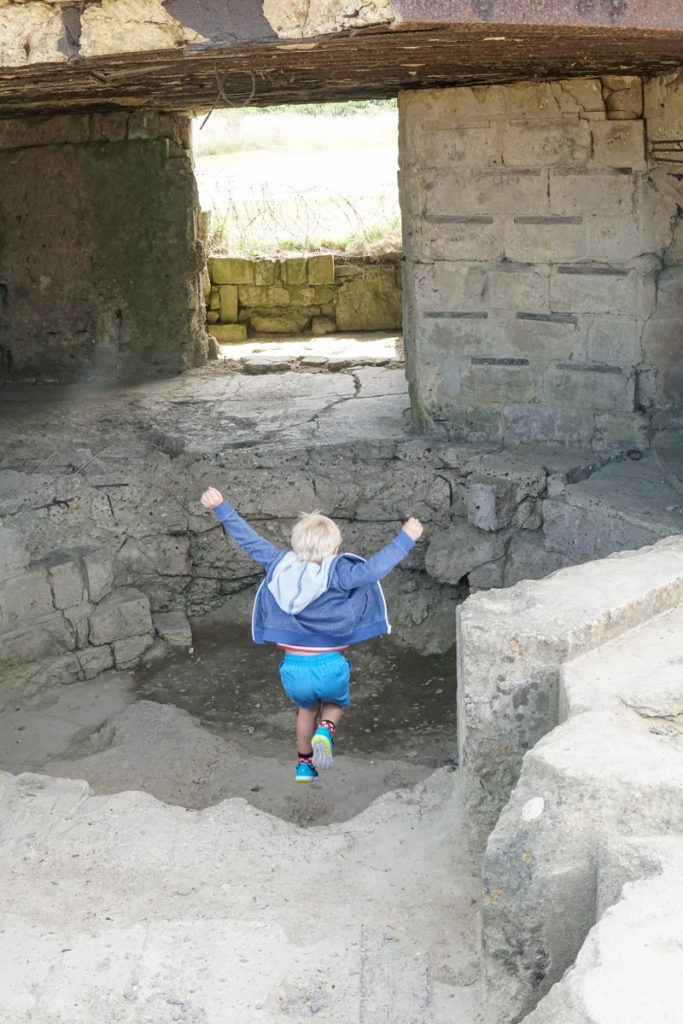 Utah Beach has a pretty amazing museum that WWII buffs like Raines shouldn’t miss.  It also has a remade troop transport boat so you can see how our boys arrived at the beach, several large guns, and families enjoying a summer day.  Surreal doesn’t even begin to cover it.

Utah Beach was considered one of the most successful landings on D-Day.  Teddy Roosevelt’s son was one of the generals, and insisted on going ashore with the first wave of troops.  Roosevelt and the boys landed a few miles off course, causing Roosevelt to order the famous words, “we’ll start the war from here!” 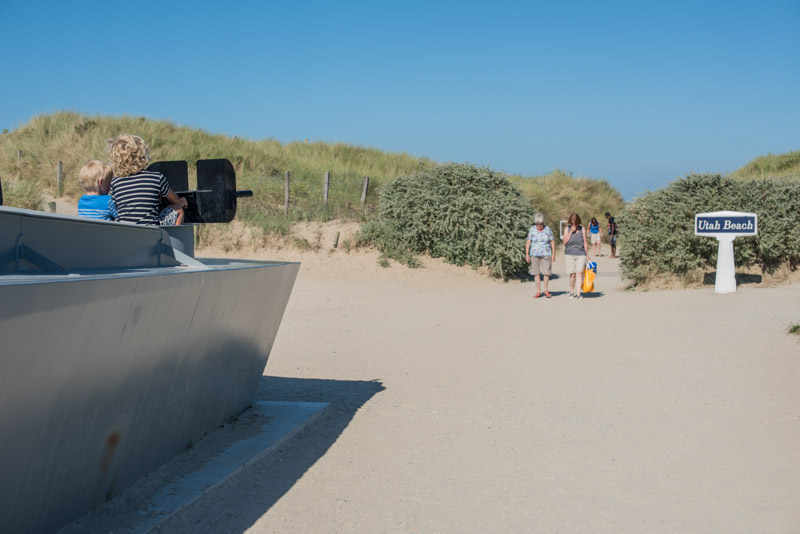 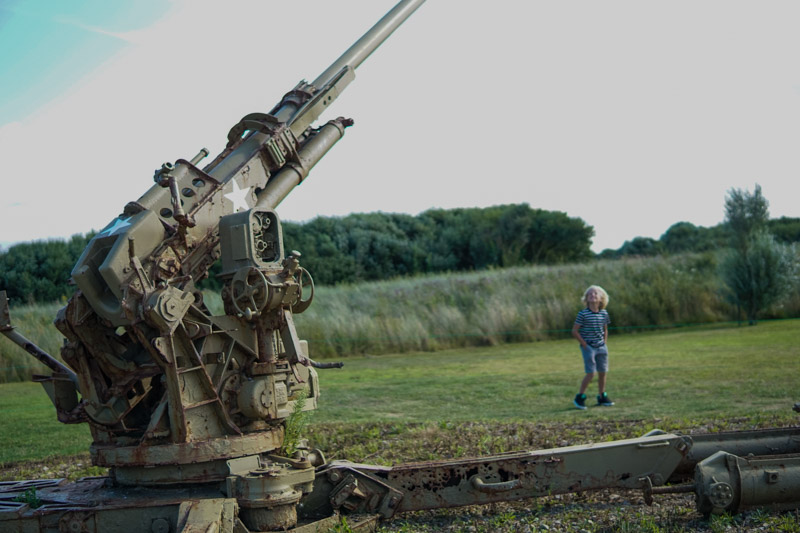 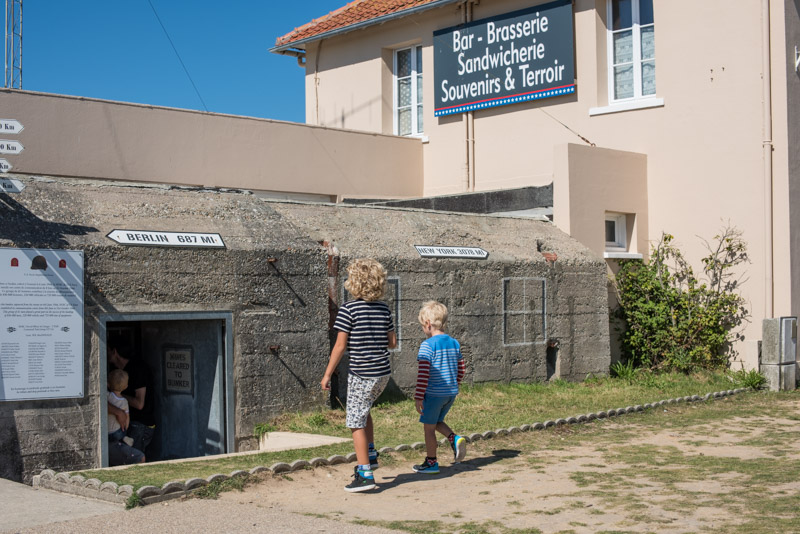 At Utah Beach, there’s now a restaurant called The Roosevelt.  It was once a French fisherman’s house that had been taken over by the Germans to use as their communication center.  (And expanded – see the painted-on windows?  It was to fool planes flying by.)  Once safely ashore, Roosevelt used it as his main headquarters, hence the modern-day name.  It’s touristy (with an attached gift shop), but charmingly so, and the walls and tables and bar are covered with the signatures of veterans of the D-Day landings.  There’s also a patio that’s a perfect spot to grab a drink. 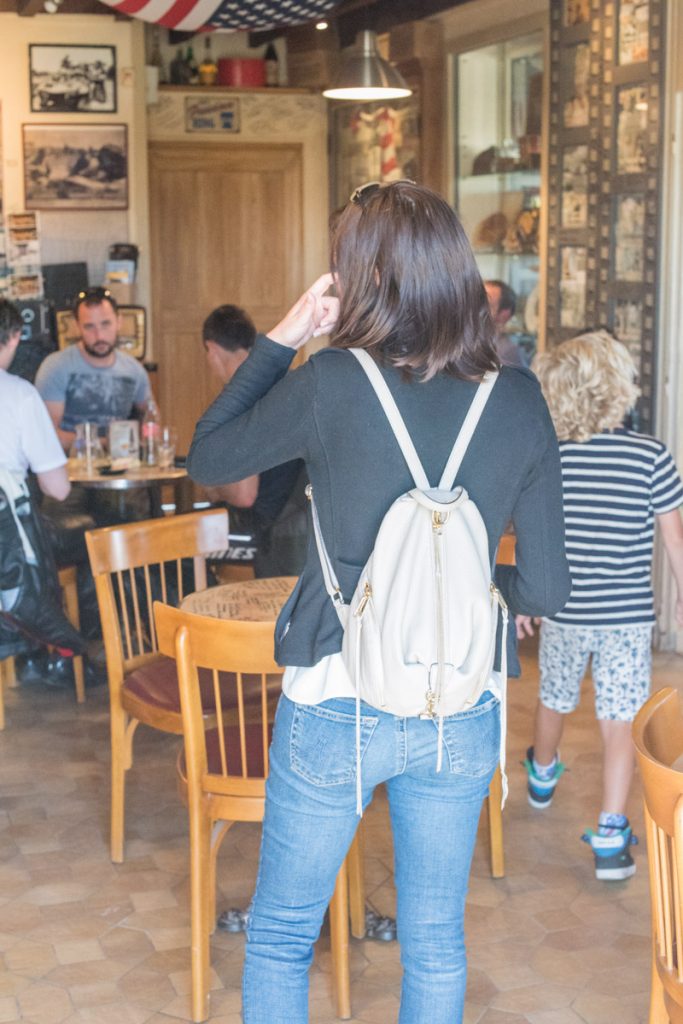 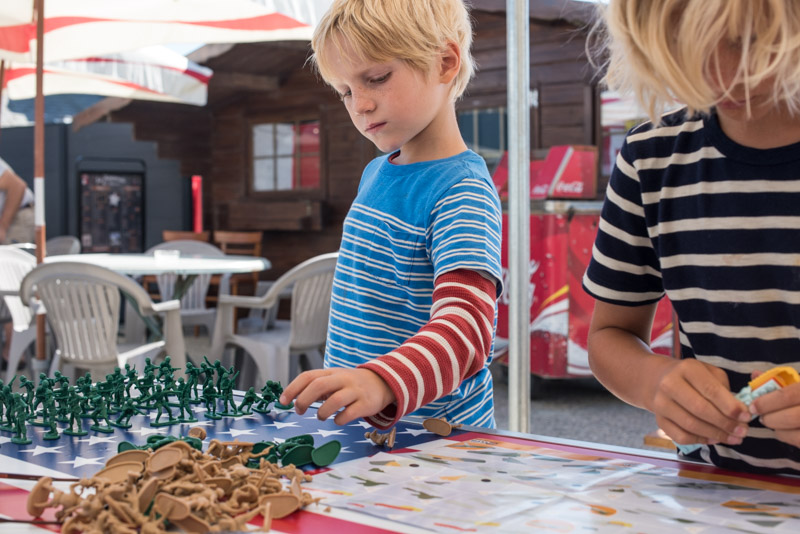 The Utah Beach museum is worth a stop.  In fact, we were running out of time on our tour with Alain, so we saved the Utah Beach museum for the next day.  The museum includes one of the planes used by the Americans to bomb German strongholds before the landing.  Unlike Omaha, these planes had more success.  (The critical difference?  At Utah Beach the planes flew parallel to the beach, rather than just flying over it perpendicularly.) 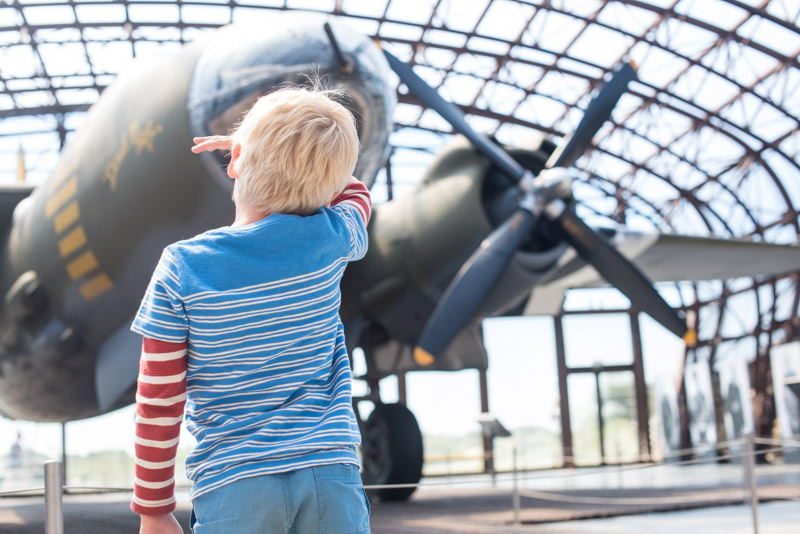 Our last stop was a really inspiring one.  Angoville-au-plain is a small French village that two American medics, Bob Write and Ken Moore, parachuted into in the middle of the night.  For three days, with fighting breaking out all around them, they set up a medic station in a thousand-year-old church.  They treated everyone – both allies and Germans alike, as well as a French child.  At one point, Germans stormed in with machine guns, and then left in peace once they realized that the two men were treating everyone impartially.  They used the pews as beds – some are still bloodstained – and treated over 80 people.  A shell crashed in through the ceiling and cracked the floor, but somehow never went off. 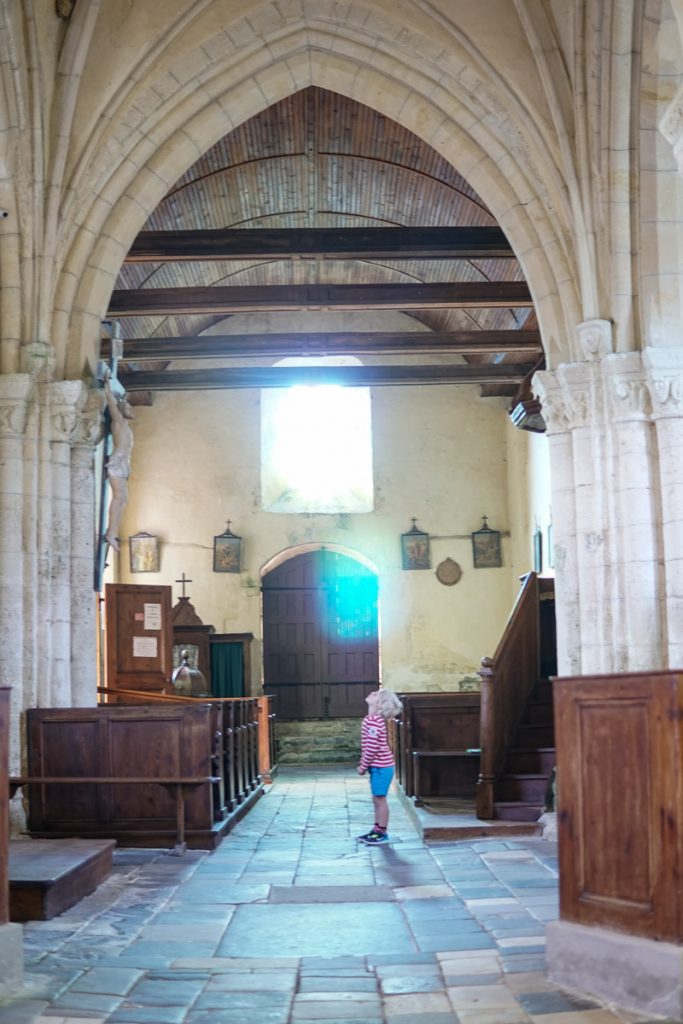 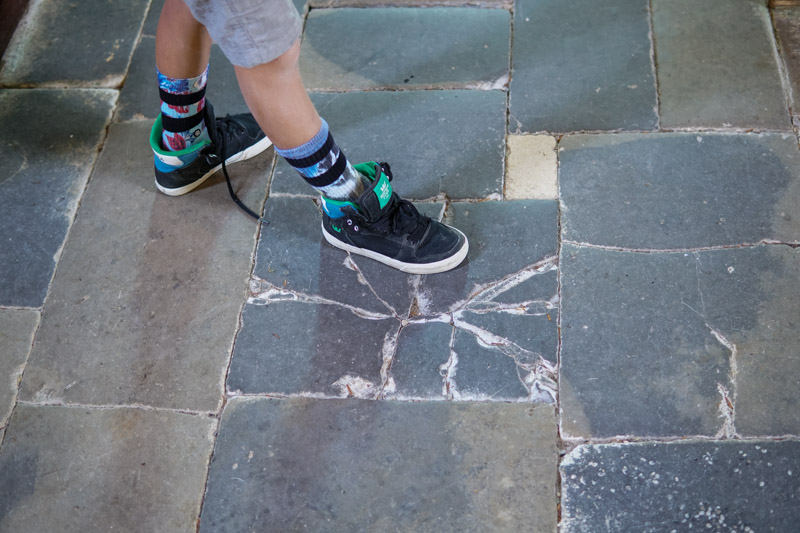 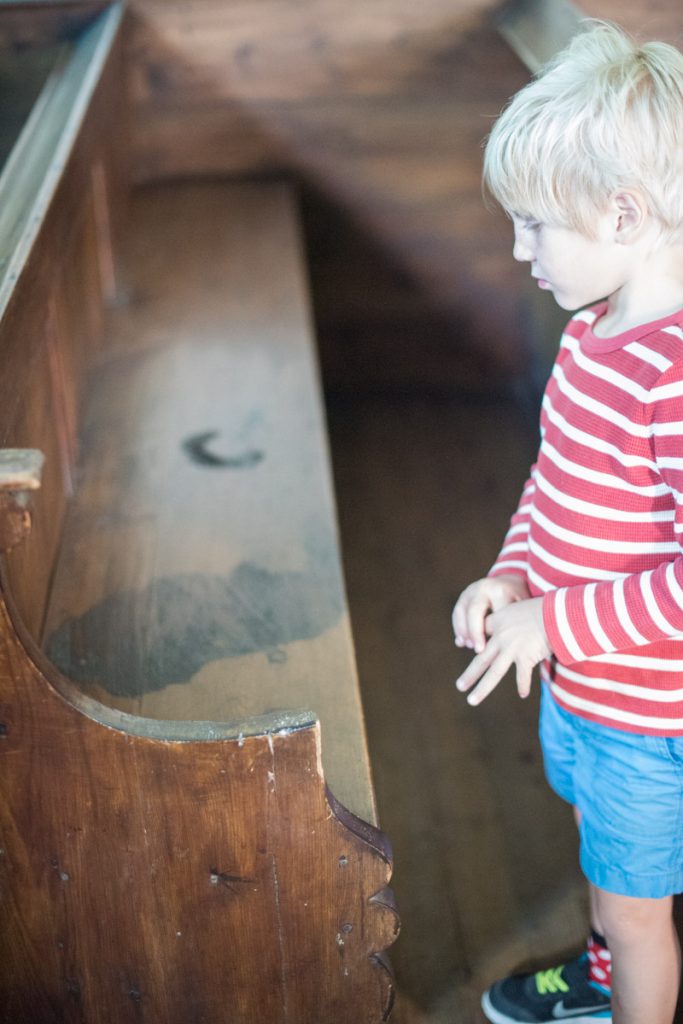 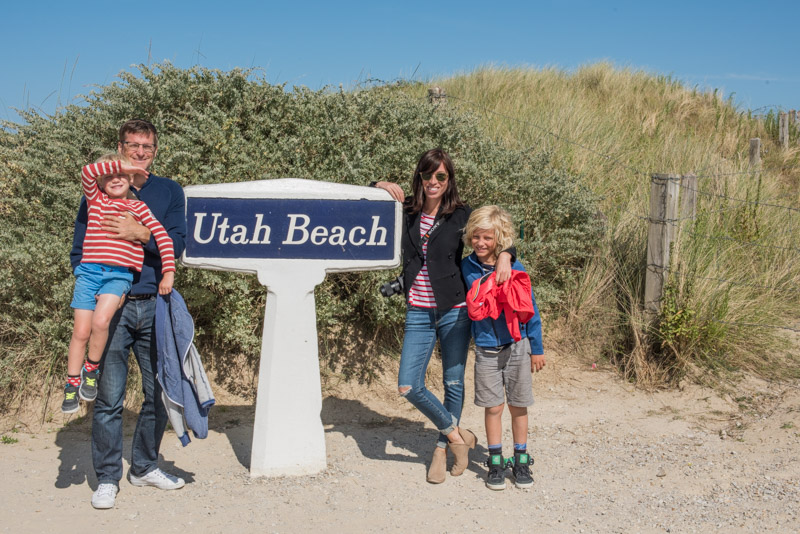 Anyway, if you get the chance to visit Normandy, go.  We can’t recommend it enough.

I’ve gotten a few questions about where we stayed (Bayeux), and a few of our favorite things in Normandy beyond the D-Day beaches – it’s all coming in another post. 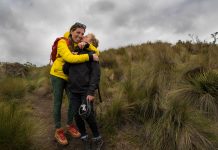 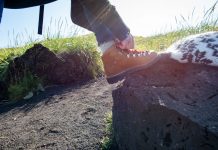 Danner Hiking Boots: Are They Worth The Cost? 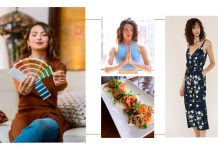 Local Love: From Westchester, NY To You