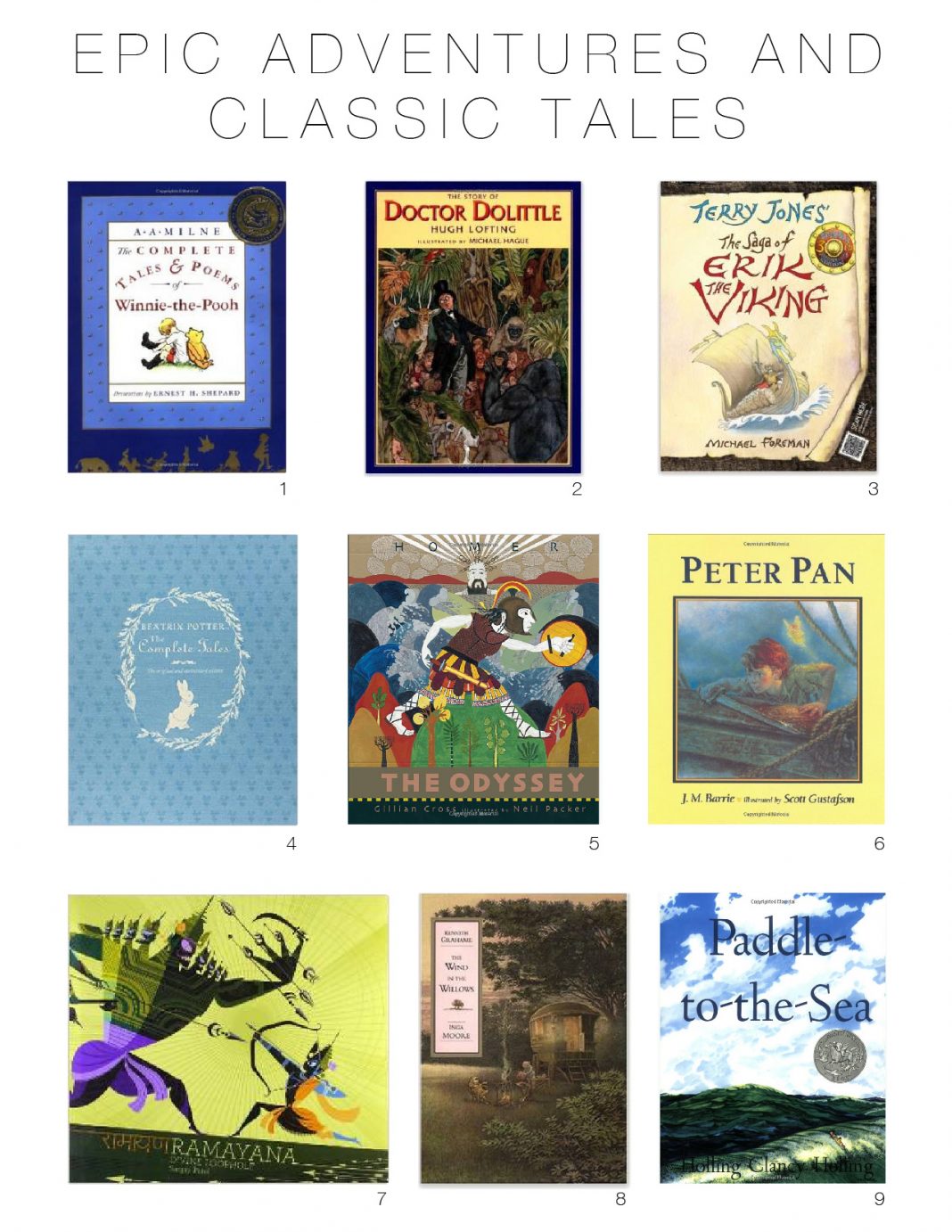 Growing up, my mom started the tradition that Christmas morning meant books.  To this day, I can’t think of Christmas without remembering that delicious feeling of anticipation a new book brings.  Of curling up on the couch – cozy socks on feet and a book in hand – for a long afternoon of reading by the fire.  By the end of the day, my cheeks would be pink from the wood-fired stove and my mind would be faraway – caught up in the world of whatever I was reading.

I’ve always been a book nerd.  I think it’s my best quality.

So in the spirit of my childhood Christmas, each year I pick out a very special book to read to the boys.  Something a little challenging, perhaps, but something….special.  An epic tale, a daring adventure, a story that captives the imagination and renews the soul (I warned you about that book nerd stuff).   Glorious illustrations and unabridged text are a must.

At the moment, Raines is almost 7 and Pax is 4, so my book choices and comments are based on those ages.  (However, Pax is a book nerd like his Mama, and has been happily sitting through Chapter books since he was 2.  I know that’s not the norm.  Raines was late getting into the book game – he just wasn’t into it early on – but he’s a fairly old soul, and likes his adventure pretty hardcore.  Some of his favorite stories are downright scary.  All of our notes below.) 1. The Complete Tales and Poems of Winnie The Pooh, written by AA Milne, illustrated by Ernest H. Shepard

There’s just something about Pooh.  About Pooh and Piglet and Rabbit and Eyeore and the seemingly all-knowing Christopher Robin.  This book, this weighty tome, has captured both of my kid’s imaginations.  Pax asks to read it every night – he especially likes the one where Rabbit and Pooh scheme to kidnap baby Roo – and Raines, in the spirit of Christopher Robin (who is also 6), acts indifferent, “silly Pooh” but doesn’t miss a word once I actually start reading.  There is simply no comparison between the original, thought-provoking, sometimes dry-humored Winnie The Pooh and the Disney version of these tales.  But be sure to get a unabridged copy with full-colored illustrations.  They’re heart-melting.  (The link above is to the full-color unabridged version of the complete tales, including Winnie The Pooh, House at Pooh Corner, When We Were Very Young and Now We Are Six.  BUT.  It’s really, REALLY heavy.  I wish we had bought this Winnie The Pooh boxed set – still full-color illustrations and unabridged, but broken down into four lighter volumes.)

2. The Story of Dr. Doolittle, written by Hugh Lofting, illustrated by Michael Hague

I had never read Dr. Doolittle as a child, so this was a fun read.  The illustrations are fabulous, and, we found, necessary (the cast of crazy animal characters is long and a bit hard to keep straight.  Pax is always trying to identify which one is Dab Dab the Duck vs whomever else).  Raines, however, was not into this book.  I suspect it’s because he’s not really into animals at the moment.  Or, in his words, “I’m just not a zoo guy, Mum.”  Um.  Ok.  But a total must-read for any animal-loving kiddo.

3. The Saga of Erik The Viking, Terry Jones

This is a retelling of classic Norse myths.  It is also, to quote one Amazon reviewer, “ripping stuff”.  He goes on:  “…the balance between straight adventure and human emotion introduces the young reader to both the obvious attractions and entertainments of mythical stories and the more subtle rewards of reading and thinking about great odysseys.”

Exactly that.  There’s danger and daring and terrifying beasts, but vulnerability and doubt too, and quite possibly the best lessons on true leadership that I can remember reading.  Raines couldn’t get enough of this epic tale, but a few parts were too frightening for Pax.  Raines still gets a steely glint in his eye if I mention The Dogfighters.  “I am not afraid of fear!” Erik cried.  “Fear is like an old friend who shouts by my side!!”  …the battle against The Dogfighters had begun.   [shiver]  Good stuff.  (Be sure to get the hardcover edition with the full-color illustrations.  Totally worth it.)

This.  THIS book.  I credit Beatrix Potter with getting Raines interested in books in general.  Raines wasn’t into reading as a toddler (he’d slam most books closed and shout “NO!!!”) but his two year old self was completely enchanted with this set of teeeny tiiiny Beatrix Potter books.  And once I started to read about naughty Peter and Benjamin Bunny, or the tantrum-throwing Hunka Munka?  He was ALL IN.  So we upgraded to The Complete Tales in a size I could easily read.  It’s amazing, really, how so many years later Ms. Potter’s stories capture my little boys’ imaginations as if no time at all has passed.

5.  The Odyssey, written by Gillian Cross, illustrated by Neil Packer

Yup, this is Homer’s Odyssey, with seriously cool art on every page, and redone in a language that is easy to grasp.  This book is best for kiddos slightly older than mine – last year it was too much for both of them, but Raines is now just starting to appreciate it.  If you are serious about classic literature, this is an amazing introduction for kids, with illustrations that make this *almost* more art book than story.

I’ve been struggling with what to say about this this unabridged, gloriously illustrated Peter Pan because I fear that my words will not do it justice.  Suffice to say that this may be the best book I’ve ever read.  Not just the best children’s book, mind you, but the best book, period.  There’s dry humor (that goes over the boy’s heads but leaves me giggling uncontrollably), there’s daring adventures and gut-wrenching honesty and an ending so bittersweet I had to read through a thick veil of tears.  And the author’s grasp of the nature of children – of humanity, really – leaves me feeling humbled.  It’s a story about us all.  A story of our fears, our disappointments and of life marching on.  It’s actually a fairly dark story, and Raines especially got that.  I think he was surprised to learn that he didn’t always like Peter Pan, although he was cheering him on in the end.   Disney didn’t get it completely wrong, though (to live is an awfully big adventure), but what Peter Pan actually said was, “to die must be an awfully big adventure” and after that how can you not let your mind soar?

The illustrations in this unabridged edition are stunning.  So true to the story and the kind you can pour over for hours.  (Amazon doesn’t have many in stock at the moment, but Biblio.com has several copies for $35.)

Another book based on mythology, this time Hindu.  It’s the story of Rama, a god-turned-prince who must rescue his wife Sita from a demon king.  There’s journeys and tricks and epic battles and – to the delight of Raines – a bow that shoots a million arrows at once.  Mind. Blown.   (Warning:  this book prompted a paint-our-body-blue phase so Raines could be like Rama.  It was pretty funny – there’s a picture in this play article. )

8.  The Wind in the Willows, written by Kenneth Grahame, illustrated by Inga Moore

That devious Toad!!  He is such trouble for lovely Mole and quick-witted Rat.  And the completely irresistible pull of the motorcar?  Well.  My boys are hooked.  POOP POOP!  We’ve actually read this book cover-to-cover twice, and each time they’ve delighted in Toad’s scrapes (but sensitive Raines always wants to get back to Mole, “he’s my favorite, Mum”).   And at the end?  The glorious finale when they go up against the Stouts and Weasels in an epic battle for Toad Manor?  I mean seriously we’re talking edge-of-the-seat stuff here.

This story is near and dear to my heart.  It’s the story of a toy, carved by an Indian boy in the Canadian wilderness.  The boy leaves the little boat on a snowbank one spring, and when the snowbank melts, the boat is whisked off down the river.  The boat (named Paddle-to-the-Sea) journeys through the Great Lakes, the St. Lawrence River, and finally the Atlantic Ocean.  While I’ll admit that I like this book more than my boys do, the stunning illustrations (spanning both miles and seasons), strongly depict a sense of time and place and of…connection that it’s earned it’s place on our shelves.

This year, I haven’t quite decided which book to add to our library (as you can see, we have quite the collection!!).  The boys just pulled Peter Pan back out, so we might just go with that.  We’re taking the train home again, so it’s a perfect time to cuddle up and read together.  But I’d LOVE some recommendations.  I was thinking maybe this illustrated edition of Treasure Island, but it’s “heavily abridged” according to reviewers.  Is there a stunningly illustrated Alice in Wonderland, maybe? (Perhaps this one?)  There should be. 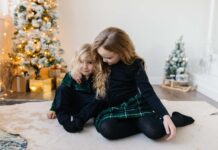 Picture Perfect (Or Close To It): Our Favorite Matching Holiday Looks From Carter’s 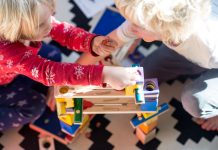 Our Ultimate Toy Guide (For All Ages) Is Here! 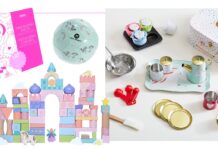 A Gift Guide For the Unicorn-Obsessed Kid