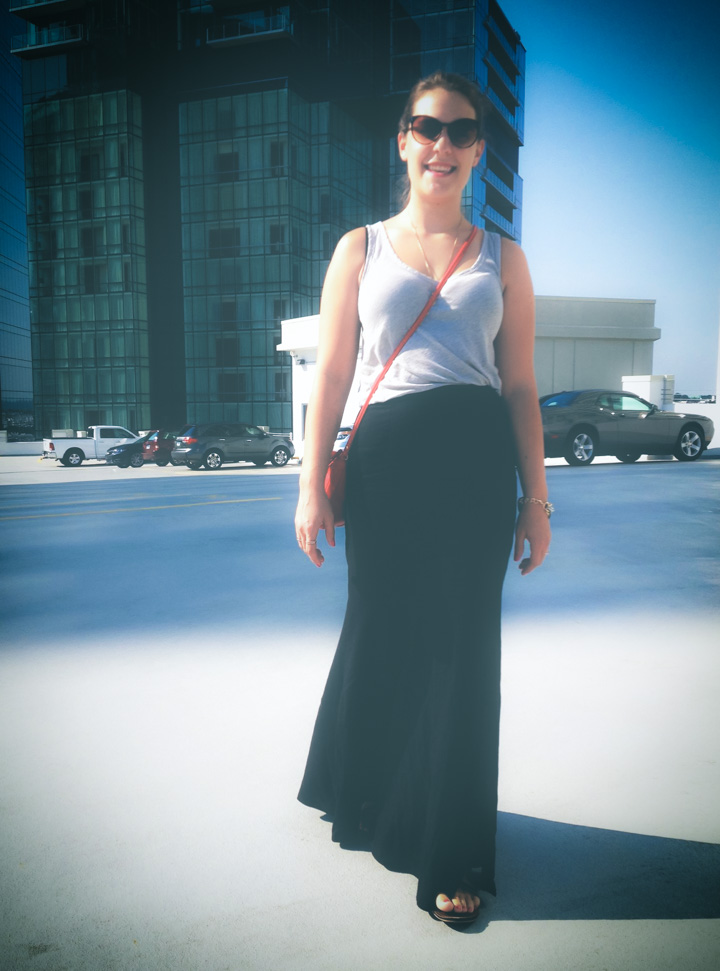 A few weeks ago, I received this email from reader Sara:

I’ve been a long-time reader (since 2010? I can’t remember except somewhere around gestating my middle child), enjoying your blogging, and your honesty throughout (cancer, clothes, mom stuff). I have an outfit for your reader submitted outfit stuff, and I also have “shit to say” about clothes and nowhere to say it except my diary. So, you can do whatever with it, but….

And so begins one of the most heartbreakingly beautiful essays I’ve read all year.  Get a cup of coffee, settle in, and hand your heart over to Sarah.  By the end, you’ll be on your feet, tears in your eyes, cheering her on (I certainly was).

There’s a great episode of The Wire (which is the greatest television show ever, fyi). In it, a former city police sergeant is working in a classroom setting, interacting on a personal level with these “inner city kids”. He makes them a bet, they win, and so he delivers on the terms by taking them to a fancy restaurant in Baltimore. The kids are excited to get dressed up and go someplace nice, but once they get inside, it slowly dawns on them how out-of-place they are.

This one clip sums up a moment I have experienced at least twice a week since moving to the Washington D.C. area eight years ago. At nineteen, I’d graduated college and gotten a job in law school administration at Georgetown University Law Center. I had the city and the potential of free graduate school at my feet. In the end, it was simply demoralizing. Professionally, I could be summed up in having just enough awareness to notice that I was pulling the old black-sweats-as-real-pants-with-a-cheap-blazer trick while giving career advice to a woman in an impeccably tailored Chanel suit. I thought I would grow beyond that—with kids, becoming a stay-at-home mom and a fledgling writer—but I’m still struggling.

Just the other week, I chose to take my oldest to VBS without shoes (having not noticed we’d forgotten them until we were halfway there). Believing it to be a small embarrassment but otherwise fine, I again miscalculated the standards. I arrived, wearing cut-off shorts (they had been cut-off because they were ripped in a dirtbike/motorcycle accident while visiting my family), and a faded band t-shirt complete with skull. My nails were not done. My hair was not brushed, but knotted on my head. My child had no shoes. In front of the mirror I’d said I didn’t care, but standing there, I cared.  The other mothers watched quietly, the leaders tried to be very nice and casual about the fact that he could not attend without shoes, and I simply stood there and blistered under the dawning realization that everyone could see it again—how I was still, after all this time, country shit. I turned tail with my shoeless and sad five-year-old, and started thinking. About that moment with the lady in Chanel. About why I had a decent salary and was still wearing the cheapest clothes I could find. About why I cared and why it mattered.

“We wore sweatpants and t-shirts. When you wanted to dress up, you put on your jeans. If you went grocery shopping, in jeans and makeup, well you were just way over-dressed. You’d stick out like a sore thumb. That’s how you gained twenty pounds without noticing–you were always in sweatpants.”– my mother, during my borderline-crying phone call, about standards of dress in the rural places I grew up.

Deep down in my soul, I still truly put on jeans to dress up. But, it’s not really as simple as revising my style rules to include “jeans are, by-and-large, casual,” for to change that deep truth is to change a thousand older truths. It’s to change the place in my soul that watches the harvest of these tiny gentleman farmer hay fields scattered around me and remembers the cut of the twine in my hands, and the sweat beading on my spine, and marvels that in this warm, southerly place you can hay at least THREE times. No one else seems to notice how amazing it is that you would literally never have to worry about running out of hay in a winter! That’s the same place in my soul that praises God for the blessing of a buying a raspberry from a store in the middle of winter (my main dream as a child was to one day be rich enough to afford buying whatever fruit I wanted, whenever I wanted it). And it’s also the place that remembers the sun sweet taste of a wild one plucked off a thorny bush. I cannot simply REMEMBER SHOES or believe JEANS ARE CASUAL, because to do that, I feel like I have to forget running barefoot through the woods all summer, and forget the cost of each penny that went into boots from the thrift store for winter. It’s to forget when someone gave me a pair of flared, low rise jeans when I was in middle school and had to wear tapered, high-waisted jeans my mom had saved from high school in the eighties. It’s to forget never actually wearing those jeans because my life would positively ruin them, and I had no way to replace them.

There’s a whole person in those memories– once they start, I cannot stop them. Stories that I slip into telling before realizing everyone is staring, and not in a good way. It’s the sound of a coal train at night, and how a deer-hide feels when it comes right off a fresh kill. How the inside is so soft and how it stretches and my hands sting when I rub salt into the hide. It’s the memory of perfecting a blow-out look by coiling my hair just right inside my hard-hat and then working a twelve hour overnight shift at a plastics factory to get myself through another semester of college. It’s the hazy memory of white robes and cut eyes and a raised cross in the grocery-store parking lot. It’s of surviving when men were ill-intentioned and there was no one to stand up for me. Those things have surely driven me straight into the person I am today. As if each of those memories hinges an entire course I became destined to walk. So many memories I still cling to, without having anyone who understands. What it’s like to be alone. What a coyote sounds like in the dark, two steps away from you. The weight of an infant sibling on my hip with the blowing grass and a twisting finger of God reaching down across the low hills. I remember that moment, fleeing from harm and halfway to the safety of a neighbor’s basement. I stopped. And tipped my head to the swirling green clouds and knew I could open my mouth and swallow those winds whole. I didn’t need to run. I could withstand.

Sometimes I sit in the air conditioning and eat my store-bought raspberries and re-blog feminist quotes on tumblr and I marvel at my privilege. I’m poor to 90% of people around me, but they don’t know what I know. I’m rich! I can pay all my bills and buy a few extras. I can buy luxury textiles to wrap my baby. And real leather boots. I can buy an orange in summer and a berry in winter. But sometimes, late at night, when I’m writing while my kids are asleep, I stop and remember. I remember who I am deep down inside and that if all my privilege falls to dust and my safety becomes a whirling wind, I will not fear, because that girl still exists, deep down, right alongside “jeans are for dress-up”.

Nearing thirty, I want different things now. I want my pediatrician to stop talking to me like I’m an idiot. I want to stop sending emails I regret to my agent (ha!!). I want to have control over who I was and how people view me. I want to sell a book and be ready for any measure of success. This is the last part of surviving, isn’t it? Growing past being a survivor? But I don’t know how, really, without losing that part of me. For every-time I forget shoes, I remember her, and clothes become a struggle between the many once and future me’s.

Occasionally, I hit on it.

In this picture I’m in Baltimore, at an appointment. I went early and took my oldest (with shoes!) around some places in the Inner Harbor. And in this outfit, I felt like I was all of me at one time. When we passed a hotel along the water, the doormen and the car service guys nodded and smiled respectfully, moving to open the doors as if I belonged. But if you dropped me beside my sister—that day butchering fresh-caught salmon and canning them for the winter in her trailer in Alaska—I could untuck my shirt and put down my bag and work alongside her. (Well, I might need a sweatshirt). If you put me in my old job, talking to the woman in the Chanel suit, I’d be seen as competent and professional. If you add “best-selling author” to my bio, I’d look like a successful woman. That’s what made this outfit a win for me.

And, I felt very Morticia Adams in it. That’s always a win.

P.S. I’ll take suggestions for replicating this into any form.

Sunglasses: Target; Tank: J. Crew from few years ago but it’s their fine-spun one (similar J.Crew tank); Skirt: ASOS (might still be on sale, but if anyone knows of a different washable skirt in this shape, I NEED IT) [NOTE From S – found a similar black skirt at Kohls, also in seriously cool stripe]; Shoes: Target from three years ago (on my list of things to upgrade); Bracelet: off the super clearance at Kohls; Bag: Fossil (similar Fossil cross-body bag). Picture courtesy of the five-year-old.

Sarah, your words are a gift.  Thank you – so freaking much- for sharing your world.  (And I have a few thoughts on outfits for you…more to come…..) 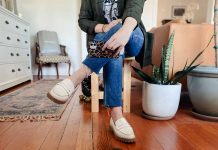 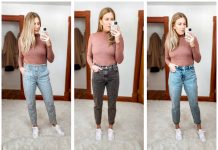 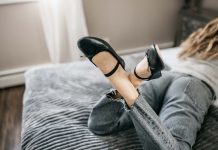