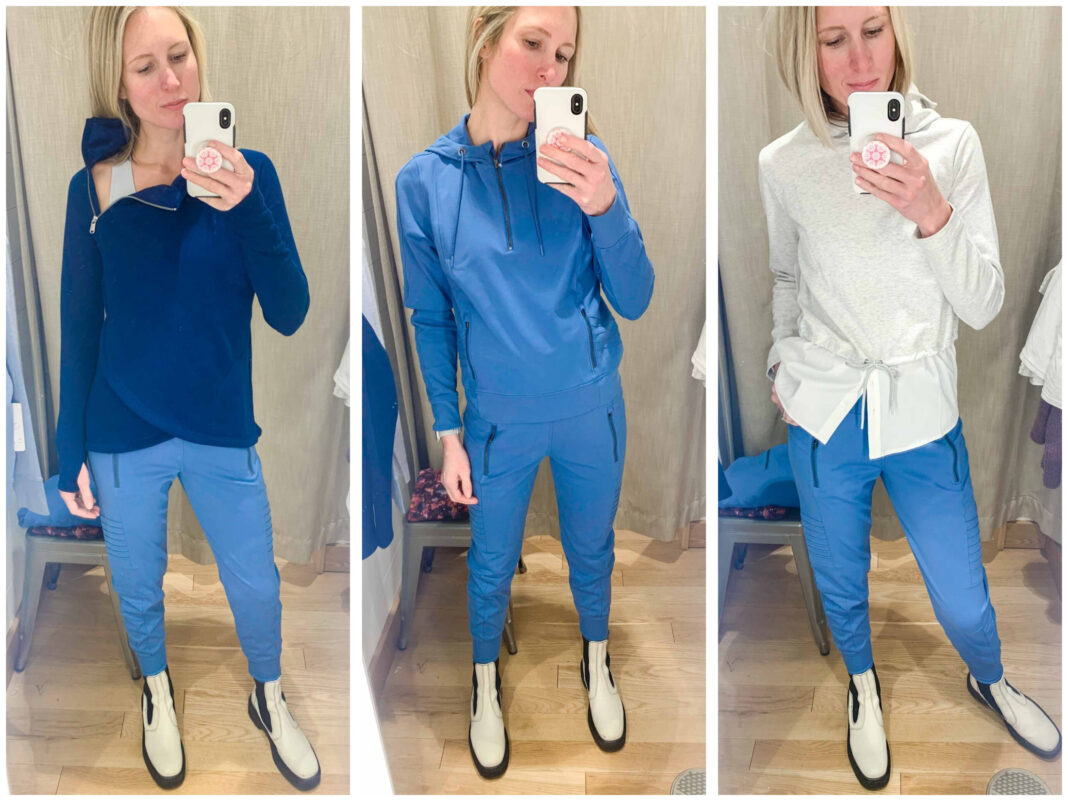 I get to a point, every winter around this time, where the thought of wearing real clothes makes me heavy sigh, (and by ‘real clothes’ I mean, anything other than sweatshirts, joggers and leggings). It’s just too cold and dreary out, blah.

Also, by mid-winter, I have fully succumbed to my innate nature of being a hermit. I used to fight it a lot more, but can’t be bothered now…so, I embrace the world of athleisure and all its possibilities.

This place of acceptance brought me to Athleta, where I found an armful of soft, inviting, casual-and-relaxed-yet-cool-enough-to-wear-out stuff, my favorites being these Venice Moto Joggers + Venice Moto Hoodie.

They quickly became five different outfits in the dressing room, all of which I can easily see wearing day-to-day.

I started here, wearing the Venice Moto joggers and Venice Moto hoodie as a matching set. The blue is eye-catching and uplifting, while the zippers and lines make it street-worthy. I’m 5’11 and the leg hits right about 1.5-2 inches above my ankle, which makes them a very comfortable length to wear with boots. If I wanted to wear sneakers, I imagine I would prefer the Tall length, which they do have!

I’ve been throwing fuzzy sherpa jackets over top when I’m running around — my favorite is this long, light grey teddy coat. It’s a cool look.

Here we have half I’m-Not-Getting-Dressed-Today, and half I’m Here To Work It. I like this combination…and I also appreciate the button-down top with the joggers, unbuttoned. Great look with the chunky boot — but I could also definitely see myself wearing high-tops and sneakers. Also! I’m looking at it now and I really, really want to add a nice, tailored (but slightly oversized) black blazer over the top. Oh, yeh. I see it. Check out Athleta’s Eastbound Blazer. Very nice option.

As soon as I pulled on this top, I melted in its embrace. It’s scrumptiously soft on the inside. The wrap in front and lower hem in the back make the lines of this top just perfect…I’d even call it a “polished” sweatshirt. I’d totally layer it over any of my tees, or even a silky tank. Bonus: it has cute thumb holes!

Soft boucle yarn makes this relaxed, lightweight sweater a real winner in the Get-Me-Through-Winter department. I never seem to have enough crew neck pullovers either, somehow…and this one, it spoke to me. It spoke even louder paired with the bolder-color joggers! A long puffer or even peacoat would be a great final addition, too!

Oh, I liked this buttoned-up sweatshirt. A little boyfriend-y in fit and style, but feminine in feel. It’s the softest fabric, with a cozy brushed interior. I liked it unbuttoned — it’s more relaxed. I tried it on with the Exhale bra, but could also see it with this Warrior Longline Bra. I also wore it buttoned up, and that’s going to be a more realistic way to wear it when out in the cold, I suppose…

A shot a few more pieces I’d be remiss not to talk about….Leggings and

These pretty, buttery soft leggings basically greeted me when I first walked into the store. I grabbed them because they are a bit of Winter cheer…and I’ll take as much of that as I can get. They call them tights? I say they’re leggings, but I suppose they are slightly thinner than a very thick pair of leggings. I don’t like thin leggings, so I know that I would have noticed if they were. Again, I was impressed that they were long enough in the regular length! Yeh, I did have boots on, so…that helped. Tall sizes are available, though, FYI.

So, I just couldn’t not share The Not-Pant-Pant with you. I saw them and was immediately interested. Unlike yoga leggings, they’re textured, but just like a pair of my favorite stretchy pants, they feel like not pants! All-way stretch, pockets to stash the important things and flatteringly fitted to the body. These take my embracing of athleisure to an entirely different level. huzzah!

Oooh, I’m sure that I’ll break out the cute, flowy tops and jeans again soon… -ish.

Find me over on Instagram, @camilledipaola ! I love making new friends & would love to share a bit more w/ you over there. 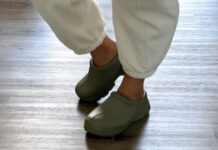 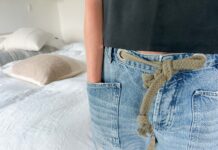 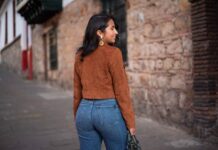 Just When You Think Vuori Can’t Get Any Softer…Sherpa.

I Tried 3 Popular Workout Dresses To See If They’re Worth...

Vuori’s New Wideleg Pant Is All I Want To Wear As...