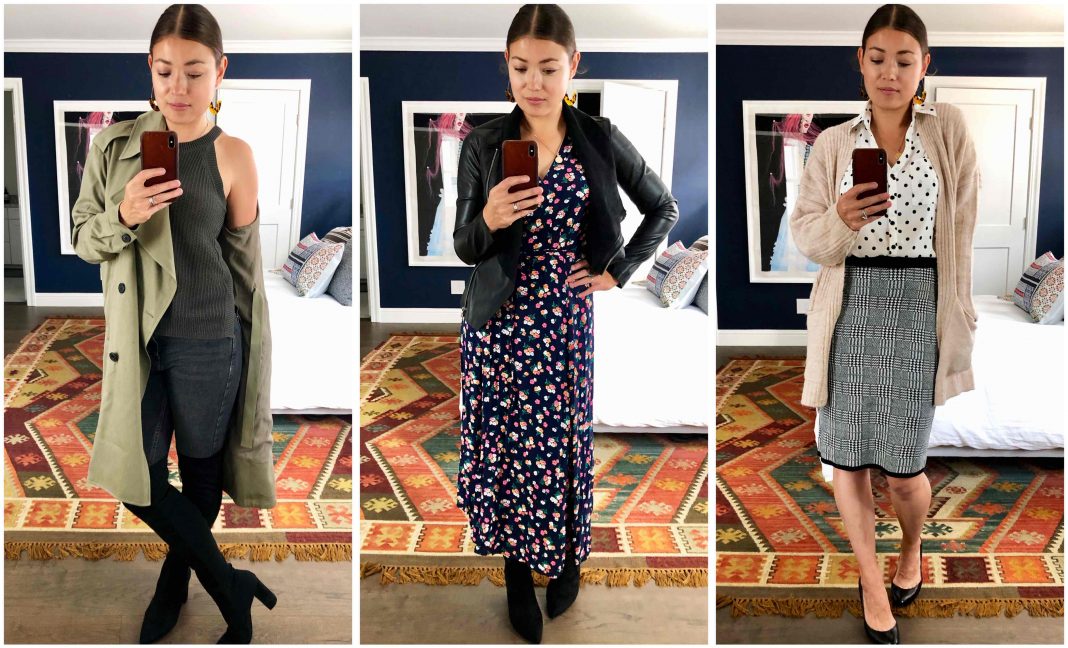 I know that, before I was on this side of the Nordstrom Anniversary Sale, I had a load of questions about these features that we see covered on fashion blogs all over the internet. What do they really buy? What do they really keep? Do these folks really turn over their entire wardrobe every season? So as someone who is pretty budget conscious when it comes to my wardrobe, I wanted to follow up my initial mega Nordstrom Anniversary Sale #DressingRoomSelfies post with a peek into what actually came home with me from the NSale — and then a glimpse into how I styled those pieces, both together and with existing items in my closet. Hope it’s helpful if you’re on the fence about any of these or looking to add a few classic (yet on-trend!), versatile pieces to your fall wardrobe.

NOTES: Throughout this post, anything with an asterisk* next to it is included in the NSale. Other items from my wardrobe are also linked up, where possible. Earrings throughout this post are these favorite tortoise shell babes — under $6 for TWO pairs. 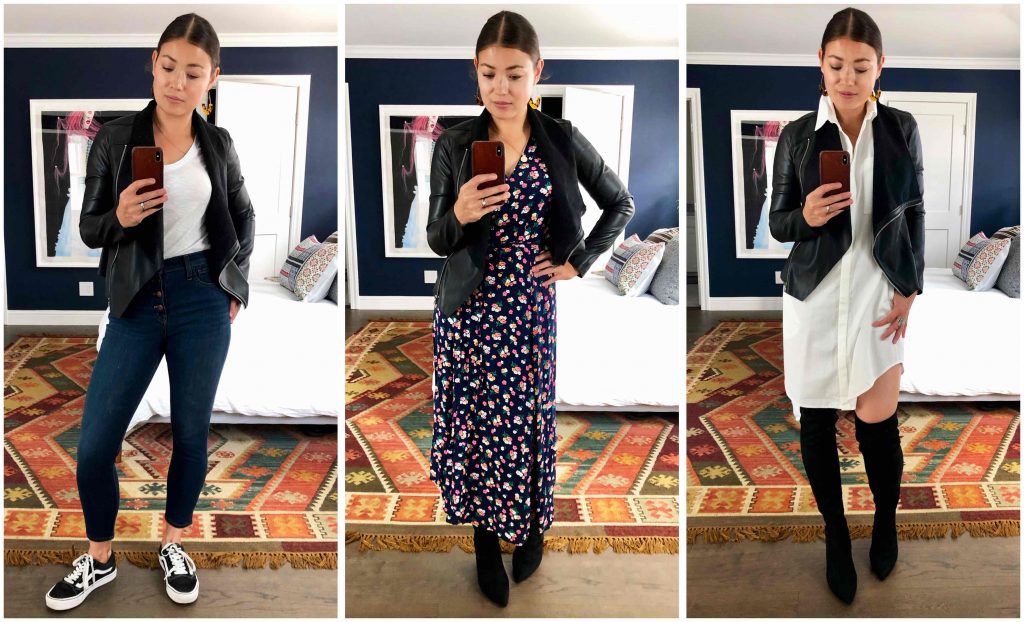 I am a sucker for a drapey jacket, so I loved this Blank NYC Vegan Leather style from the moment I put it on. The drape is just so effortless, and it adds instant cool to whatever it’s paired with. It’s easily going to be something I wear with jeans and T on a daily basis (a la the first look — that white T has got to be the most flattering I’ve ever owned), but it’s also the perfect way to take the girly edge off a sweet, floral dress. (Note: this dress is past season from GAP, but I noticed this one during the NSale — very similar vibe, and I would have loved to try it on if they had my size). Over my favorite Madewell Courier Shirtdress (which is nearly sold out, but I love this Everlane alternative), it’s just about as sexy as this low-key mama gets. Hello, date night. Wearing an XS. 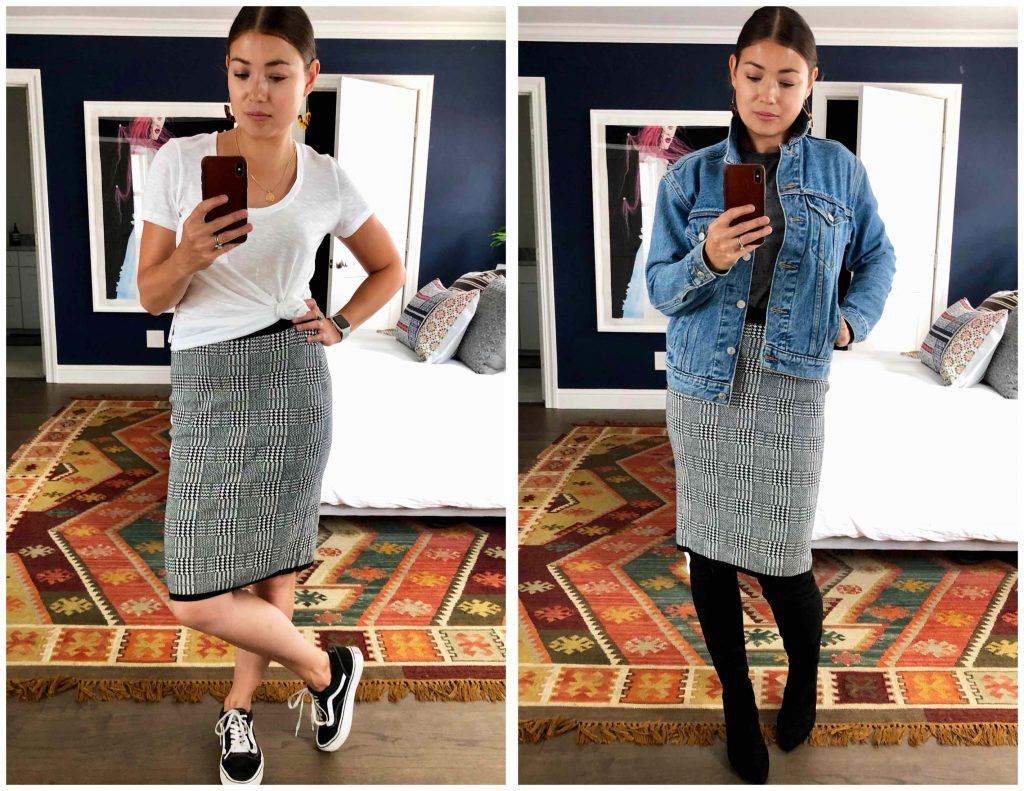 I mentioned before that this skirt was so shockingly versatile, it instantly became a no-brainer. Love the sk8ter (sorry…) vibe with a T and Vans, but it’s just as good with a swishy polka dot blouse (I found a gorgeously proportioned Frame alternative if you’re looking to invest in a timeless classic) and classic pumps for the office. I especially love it topped with a playful bomber. Perfect for happy hour. Wearing an XS in the skirt, but could have even sized down to an XXS. 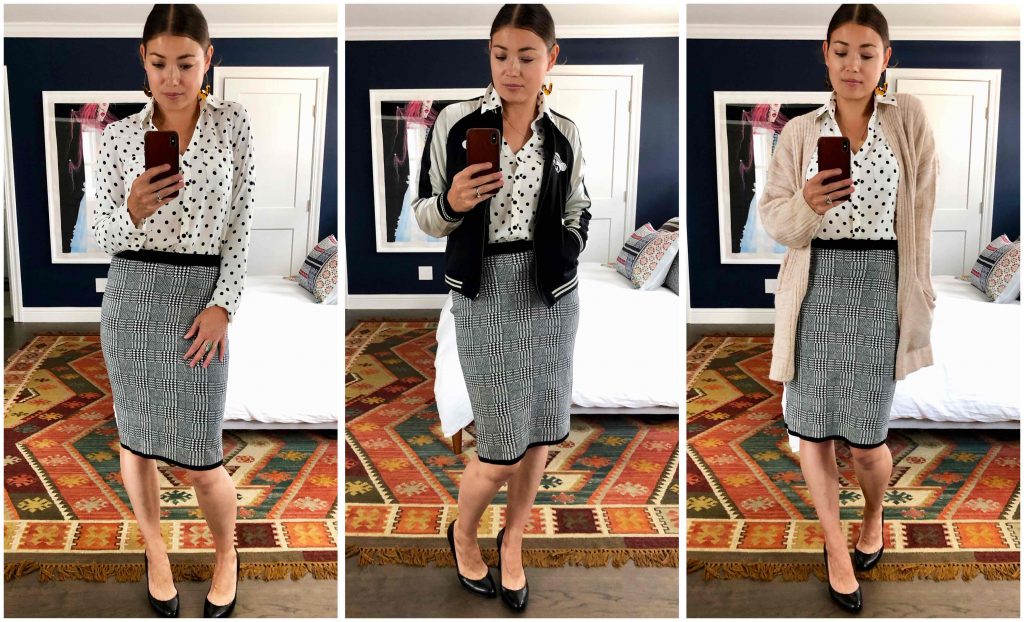 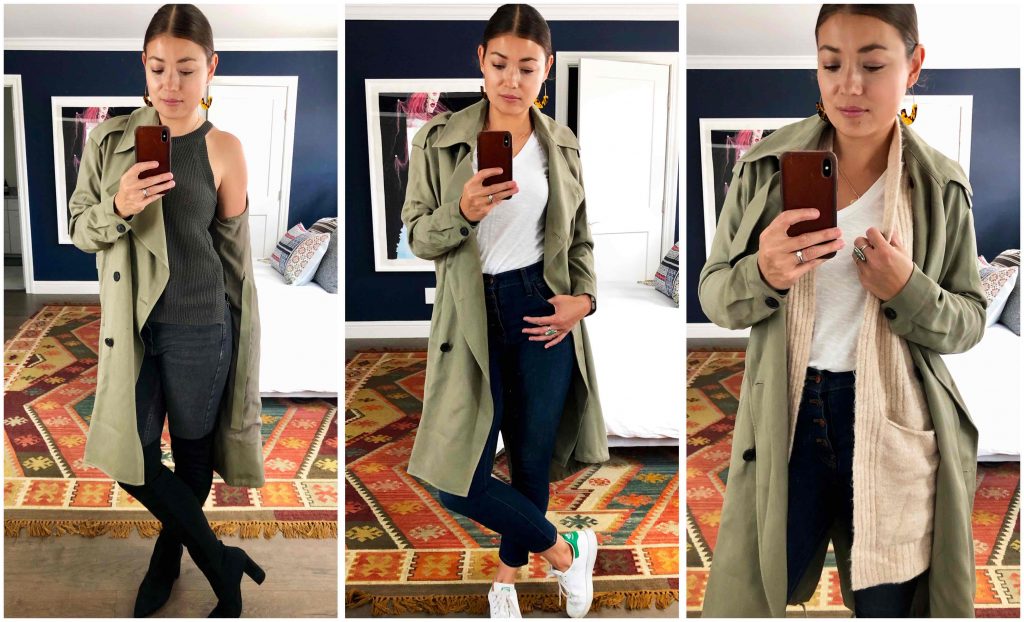 Even though I’m the first to admit I’m a price conscious shopper, as I get older, I find myself going less for the fast-fashion bargains and more for pieces that feel like a deal in terms of quality, style and longevity. This trench is one such piece. I mentioned before, but it’s just SO MUCH BETTER in person than these images or the pictures on the website would lead you believe. The movement, the color, the drape. It’s also roomy enough to layer a sweater underneath but not so oversized that it’s clumsy looking or ordinary. 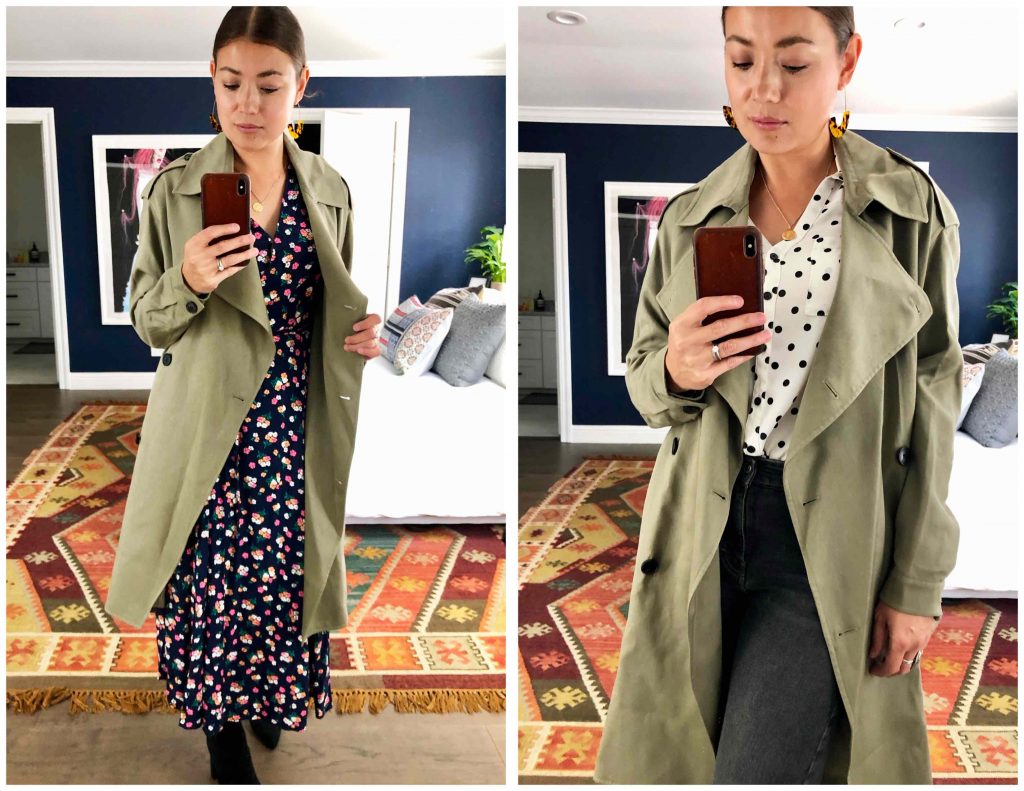 And it’s perfect over more of a work uniform, too. Seriously, of this small capsule wardrobe I included in today’s try-ons, there was nothing that didn’t look better with this trench layered over the top. Just a babe of a coat. Wearing an XS. 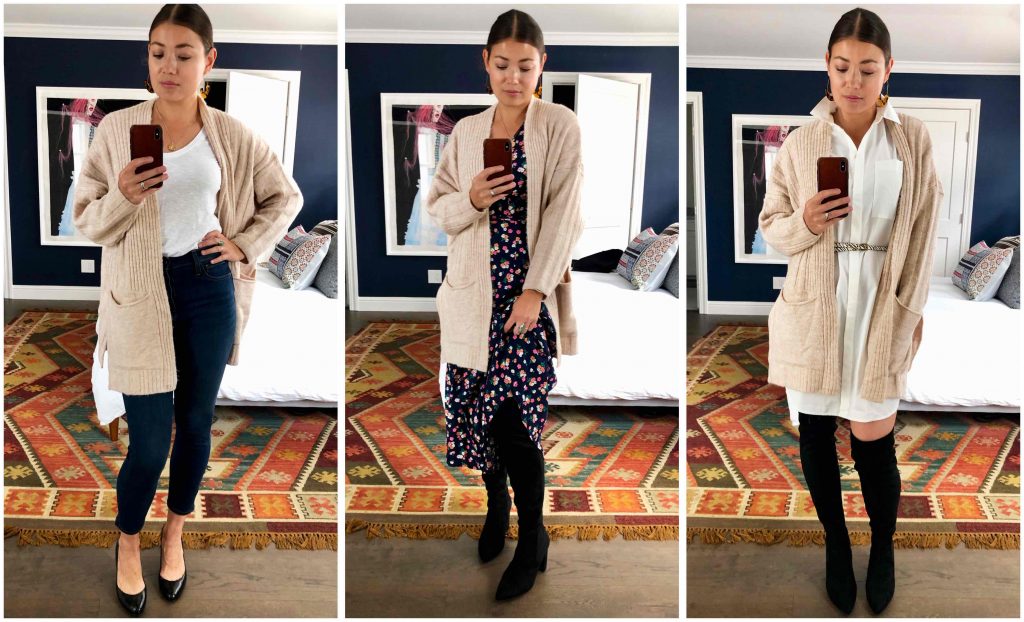 I was head-over-heels in love with the supersoft, drapey Vince Open-Front Cardigan that I tried on in the sale, but when it came down to it, I decided to allocate more of my budget to the trench. Am I slightly regretting that now? Well, no, because the trench is as solid an investment as they come, but the Vince cardigan was undeniably plush and luxe. That said, on me, I actually preferred the color of this Topshop Oatmeal Cardigan, which reads just a shade more blush in real life. I like how it warms up the more bleak colors I tend to gravitate toward in the fall, and the scale is just as good as the Vince sweater. Admittedly not as cushiony soft, but it’s a fraction of the price. (If you’re looking to put your $$ into a sweater of this style, though, the Vince is worth it.) I’d wear the first look, above, for Casual Friday, the second any day of the week (but it’s feeling very preschool mom chic) and the third for night out with friends. Wearing an XS. 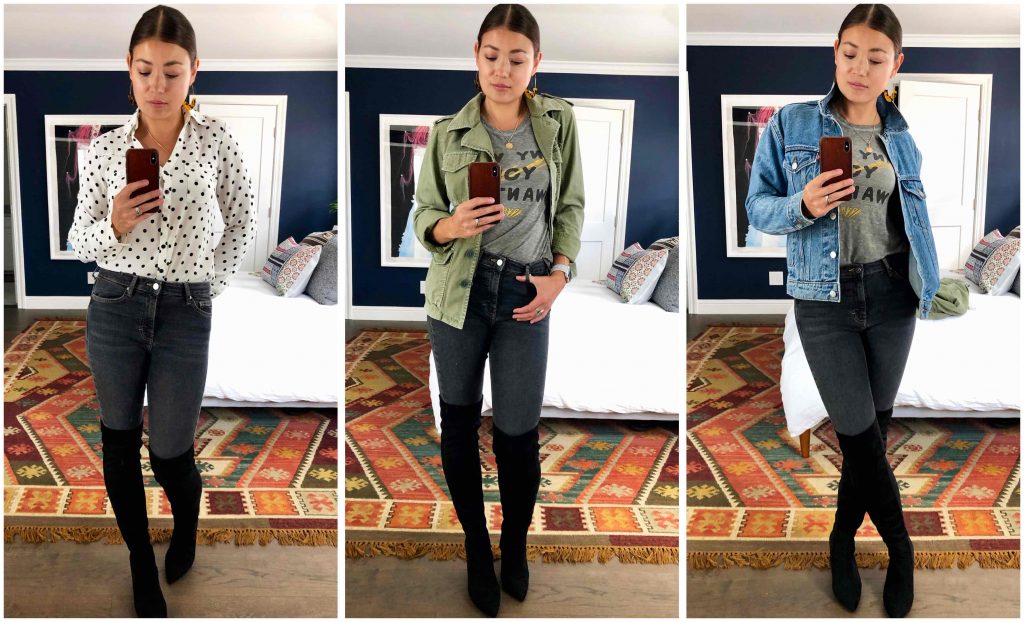 I’ve got a better picture of the ripped hem on these Topshop jeans here, but the thing I love about them so much is that, since the distressing is isolated to the hem, once you add a high boot, they’re just a darn good pair of perfectly washed gray jeans with a super flattering high-but-not-too-high waist. Wearing my usual 25.

And as for the boots: well, I’ll tell you this: after an hour or so of wearing them around the house, they’re warm. In fact, when I lived in the Midwest, I would have killed for a walkable, high-heeled boot that is as warm as these guys. They’re comfy, too. And, clearly, they look great dressed up or down. (Scroll back up to see them again paired with both short and midi dresses.) And I’m not gonna lie: rather than feeling at all pirate-y, which is the vibe I sometimes get from tall, black boots, I just feel like a total badass in these. For less than $90, I’m so glad I scooped them up. Wearing an 8, which is my usual size, but would size up by a half if adding boot socks. 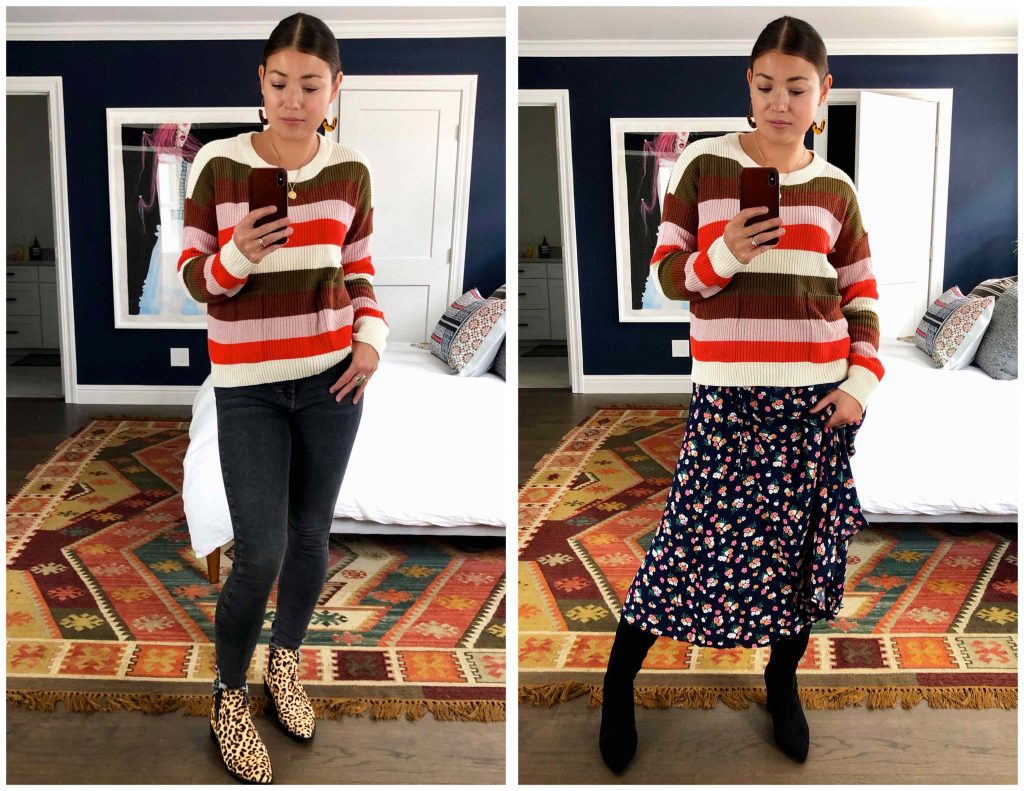 Another piece that looks so much more flattering and vibrant in person. An easy topper for skinny jeans and boots (these leopard boots are still available, but there’s a similar style with a chunky heel and rounder toe in the NSale). And if you’re bold enough to pull a Sarah Jessica Parker in Divorce and attempt mixed prints, I actually really love the funky vibe over a floral midi skirt or dress, too. (For what it’s worth, adding the ALLSAINTS trench would add even more SJP flair.) Personally, I’d totally wear either look seven days a week.

Shop Everything I Bought At The #NSale

Everything I bought so far from the 2019 NSale, including a few pieces I didn’t take the time to style up here because the current stock is either super low or sold out (fingers crossed for re-stocks!).

Shop Everything Else Featured in This Post (or Similar)

Hope you guys are scoring some good finds out there! I’d love to know if you scoop up any of these items — or what pieces I might not have covered that you’re loving so far. 🙂

P.S. Don’t forget to check out the rest of the team’s faves and our full NSale coverage here! 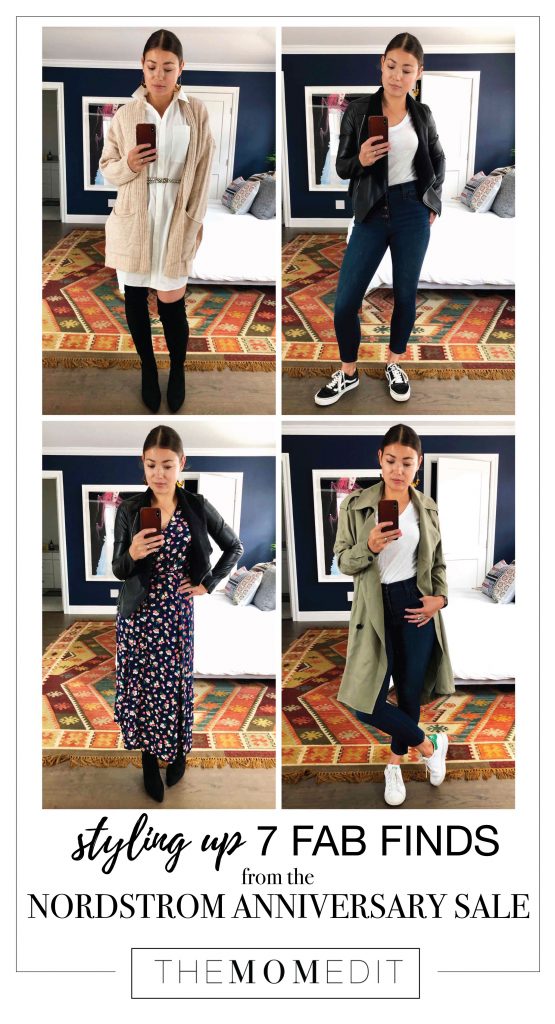 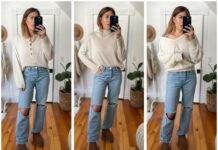 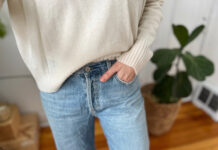 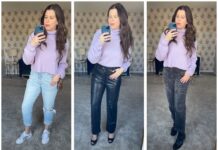 6 Cute (And Easy) Outfits With This Boxy, Cropped Sweater