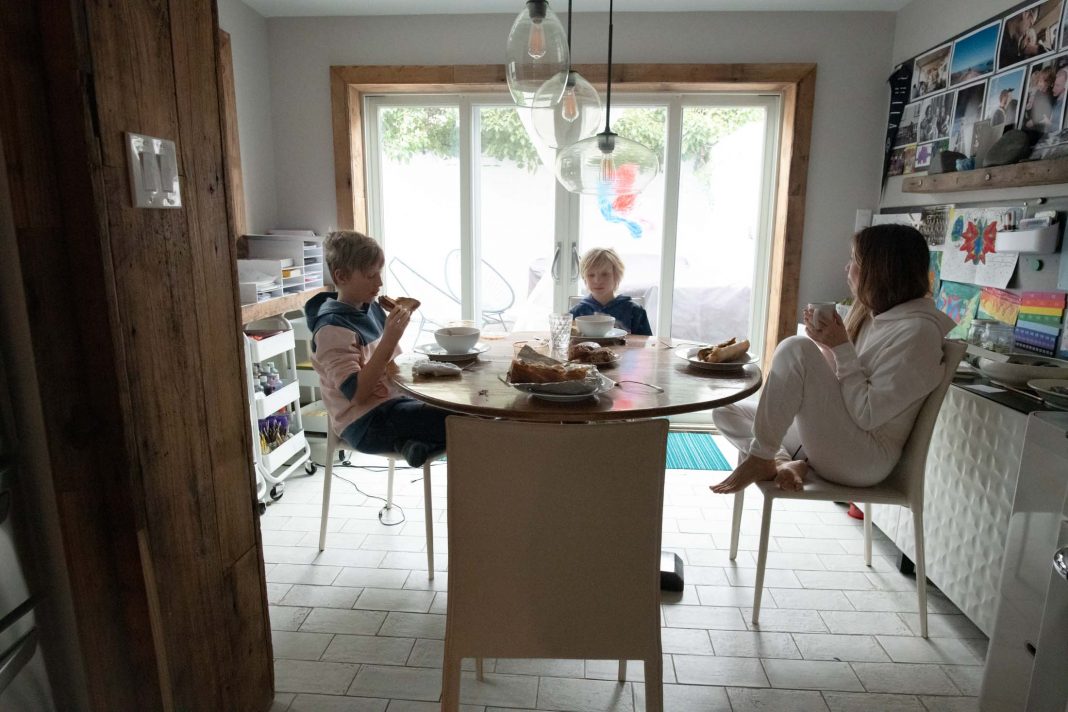 We finished watching The Big Bang Theory with the boys last week. It’s been our little family tradition for years now, so it felt almost like the end of an era.

Now…the Big Bang Theory isn’t what I’d call kid-friendly. In fact, there were many times that we had to pause the show and have a discussion about appropriate behavior, or — egads — rape culture, or why I don’t think anyone should ever use the word ‘bitch’, and once we even had to skip an entire episode because no amount of family discussion could make it OK.

But I like that the show glorifies intelligence (all different types of intelligence), and it is funny (as least for math and sci-fi nerds like Mike and I) and if I’m being really honest…Mike and I were DONE with kid shows. We had gotten to that point.

But the real reason that we started watching The Big Bang Theory — as a family — is because Raines begged us to.

Raines was always my Dad’s little buddy. And my Dad — who had been diagnosed with Parkinson’s right before Raines was born — could only do so much. As Raines got older, my Dad’s disease progressed into Lewy Body Dementia, and my Dad’s interactions became more and more limited.

When Raines was 5, he started climbing on my Dad’s lap at the end of the day, for the purpose of watching TV together. Dad was usually exhausted by then and Raines — delighted by the prospect of screen time — would snuggle in contentedly and just watch whatever Dad had on.

Even as a 5-year-old, Raines’ sense of humor was pretty dry (like my Dad’s), so I could hear them both laughing at the same jokes.

As the years went on, the tradition continued. As he got older, Raines’ laughter became more frequent, even as my Dad’s dwindled off. Raines got bigger, and started to outgrow my Dad’s shrinking lap, and eventually ended up on the floor, curled up by his feet. Towards the end, Dad would doze more than watch, and Raines would sit there, holding his hand. Laughing at the jokes for the both of them.

The sitcom they usually watched — the one with the reruns — was The Big Bang Theory.

At some point, after much begging from R, the four of us started watching it together. We started with the very first episode, of the very first season. And it took years, but we just finished the series last week.

As were about to start the final show, I looked at Raines. “Raines,” I said. “Do you remember how this started? Do you remember when you started watching The Big Bang in the first place?”

Pax — who would’ve been a toddler at the time — had no idea.

But Raines knew. He stared at me for a moment, frozen and speechless, then slowly put his head down on his arms and started to sob.

“I remember, Mom” he choked out.

Today would’ve been my Dad’s 76th birthday. Crazy how much we still miss him.

#TheMomEditMasksUp Are you wearing your mask? I’ve been trying to work the scarf thing, but it’s tricky. Thankfully, my friend Kerri mailed us some gorgeous masks that she SEWED, and it’s good to have talented friends. I had also ordered these cute ones from Alice + Olivia, but they won’t be here until the end of the month, so. Since this mask-wearing thing is something we must embrace for the collective good of all our communities…we thought we’d try to help normalize it. So. If you post a picture of yourself on IG wearing a mask and tag us (@themomedit, #theMomEditMasksUp)…then for every 25 people who participate, we’ll create a little care package for an essential worker (a delivery person, someone working at a grocery store, etc). And let us know if you have someone in mind you’d like to gift!

I succumbed. That darn Nordstrom sale finally got me. I spent so much time perusing sales this week that I actually participated in this week’s Weekly Sales Report. Personally, I’m the most excited about these tan Vince sandals — they’re like those super-expensive greek sandals, but with a comfortable bottom and slight ’70s vibe…and this striped v-neck tee (also available in plus sizes). Someday I’ll be wearing both pieces with denim cut-offs and my old straw market bag (which, geez, is now 40% off — how did I miss that??).

I will machine wash this. This J.Crew top is 100% silk…but also tie-dye and so beautiful it makes my head spin. The only hope for a top like this (at least in my life) is to treat it like a t-shirt and I am here for it. (50% off with code REFRESH.)

Supporting small businesses….I’m really impressed with the two mamas over at Social Threads. Times are tough for small businesses, and yet they are donating 10% of profits on purchases (through April 15) to Direct Relief, the humanitarian aid organization. My top picks? This white tank (seems boring, but I’ve been trying to find the perfect one and it might be it), this easy midi dress that looks perfect for lounging, and these Golden Goose knockoffs that fooled me for a sec.

Oooo…YUM. My standing Chinese take-out order is always, ALWAYS Singapore Rice Noodles. And it’s my kids’ fav, too. In fact, Gwen and I went through a 2 week spurt where we ordered it for lunch…daily? IDK what was going on there #stresseating but whatever. Anyway, our Em just created a homemade version of Singapore Rice Noodles over on Nosh & Nourish, and I’m adding it into our meal planner for next week.

The new data on ventilators blew my mind. This article from STATNews is so freaking interesting. It turns out that new data is showing that some COVID patients have strangely low blood oxygen levels (like…low enough they should be dead) but they’re not gasping for air, their hearts aren’t racing, their brains are fine. Doctors quoted in this article are re-iterating that COVID-19 is quite unlike anything else we’ve seen, and now many of them are re-thinking ventilator use. A few have had much better luck with less-invasive methods and the whole article is fascinating and totally worth a read.

I just need a vaccine touchpoint. Like…literally anything that sounds promising. It turns out that a Philadelphia lab, Wistar, is making progress on a COVID vaccine. I mean, let’s not go nuts here — vaccines are still at least a year away, but if you need a bit of hope that someday this will all be over, this article. (Thanks, Liza!)

An update on Mike’s work. So many of you have asked for updates…I’ll give it my best shot. Shit is getting very complicated, so bear with me. Mike’s team rolled out a new model this week. The old one (or, more accurately, the first one his team created) is called CHIME, and it’s a traditional epidemiology model, based on the process of disease spread. This model gives a pretty accurate prediction of 2-3 weeks out, and can be used at regional, state and national levels, using observed data as inputs. The other model you may have heard of is IHME (not from Mike’s team) and it’s a curve-fit model, using data out of Wuhan and Italy to power the model. The IHME model is highly dependent on accurate reporting from both China and Italy, and assumes that the social distancing measures in the US are the same as the ones happening in China and Italy. (Obviously, that’s the concerning part, but both models have errors in their assumptions — that’s the nature of models.)

So which model can best predict the peak? This, of course, is the million dollar question. The one Mike is constantly being asked. His answer?

Then, annoyingly, Mike quotes Dr. Fauci, “…the virus makes the timeline,” he intones.

But since I’m his wife, I press him further — surely there’s a better answer than that.

“Well…” he says, choosing his words carefully. “These models are showing that we are plateauing. The rate of social distancing is going to determine if the curve continues to go down, or if it starts to rise again.”

I make an exasperated sound. That is barely an answer.

“Look Babe—” he starts back up, agitated, “these questions about the peak, it’s like…it’s like trying to game the stock market. It’s like asking ‘which stock should I buy’ — no one knows that! We’re in the same realm as trying to predict the stock market. I mean OK — someone could build a stock market predictor that might help them predict likely winners for the next few weeks, but if you try to use it further than that, you’ll lose. This is the same thing!”

No wonder Mike and, quite frankly, his whole team, have been so stressed. The stakes of this particular gamble are really freaking high.

Want more? I’ve come across two articles about modeling that are really helpful The Atlantic’s Don’t Believe the COVID-19 Models is one, and this article in The Washington Post talks about IHME vs CHIME and other models directly.

Stay strong, Gang. Wash your hands, wear your masks, and know that your choices are making a very real difference in your communities.

ps. After this is all over, I’m making a mental note to ask Mike again about that “stock market predictor”. 😉