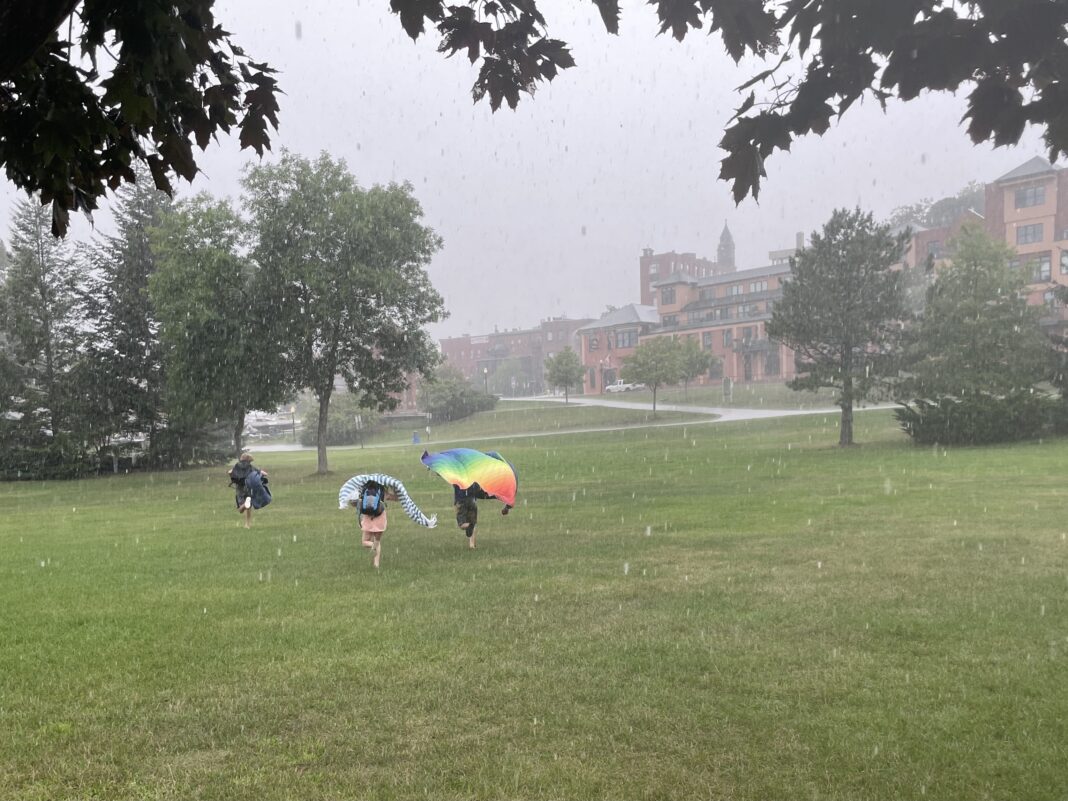 We’re back home in Marquette, MI visiting my mom and sister for a bit.  Scotti’s doing shockingly well, now only 4 weeks post-op.  We’re doing our usual things: going out to dinner, heading to the beach, and while she does get tired faster, you wouldn’t even know that she recently had brain surgery.  Her face is still half-paralyzed, but getting better every day.

Scotti and I have been laughing that we didn’t realize how animated our faces were until half of hers stopped moving.  We both have such giant smiles – they seriously take up almost half our faces.  I have no idea where our smiles come from – the only other person who has the same one is our cousin, Molly.  I’ve always wondered if one of the people in those creepy, old, black-and-white family photos Dad had hanging in our basement were hiding a giant grin behind their grim expression.

Greenlea (Scotti’s daughter) came over for a sleepover the other night.  She’s a hoot.  We watched Vivo (her new favorite and now mine, too), and ate popcorn.  The next day, the boys and I took her to Donker’s Candy Shop for lunch and treats.

“Aunty Shana can you believe that in my dance class there’s this kid who BARELY dances?”

Greenlea is incredulous.  My brain flashes back to her first dance class a few years ago, when she spent the better part of it rolling around on the floor and whining that it was “too much worrrrrrk.”

“Hmmm” I say.  “Maybe your friend is just not feeling very comfortable?”

“COMFORTABLE?” Greenlea looks at me, eyes bugging out. “Oh, she’s comfortable all right.  Barely moves her feet, doesn’t even move her HANDS.  Know who’s uncomfortable?  ME.  I’m moving EVERYTHING!!”

OMG I love this girl.

Then the boys and I took Greenlea to a bookstore where she chose one book on monsters and one called, The Book No One Wants To Read (Greenlea: “well, this is hysterical”) and found a shady spot under a tree to read for a while, spread out on blankets.

But because it’s the Upper Peninsula of Michigan (basically Canada to most of you), and the weather really does change every 15 minutes, a storm rolled in – like we could literally see the one black cloud taking over the sky – and while I *thought* it would pass right over…it did NOT.

“AHHHHHHHHHH” Greenlea screamed as she ran, her backpack bouncing, arms over her head, trying to hold a blanket in place.  “I CAN’T DECIDE IF THIS IS FUN, AUNTY SHANA!!”

I’ve decided: Flares. If wearing real clothes does, actually, become a thing this fall (summer doesn’t count – it’s all dresses) I’m leaning hard into flares. I was shocked by how much I loved this pair from Paige – the perfectly ripped knee, 70’s blue-jean blue – but I’m also seriously considering Frame’s cute patch-pocket pair to hem for flats. The Paige jeans run slightly small (mostly TTS) but maybe size up in the Frame pair. (The Frames would also fit someone VERY tall, based on the miles of fabric I’m about to cut off.)

Athleta has a new color called minimalist gray, and it’s gorgeous. It reminds me of sea glass. I just bought these leggings in the color, and this top in ‘horizon gray‘ to wear with it. The color combo feels very last-days-of-summer and makes me happy.

Been doing a little running….and needed to upgrade my years-old running shoes. I always wait until we’re home so I can hit Queen City Running (they have the best stuff and most knowledgeable staff) and I came home with the Brooks Adrenaline in white/alloy/light blue. But whoa, Nordstrom has a blush color in that same shoe and…wow.

My next necklace is going to be Gwen Beloti’s delicate cubed necklace. I love the tiny geometric shapes on such a delicate little chain. Gorgeous.

Morgan’s ON FIRE. Morgan, the owner & designer behind ShopBURU (and one of my favorite people), has been flexing her design muscles and whoa. I’m obsessed with the architectural ruffle on this LBD, this limited-edition print made my jaw drop, and this printed mini dress is everything I’m looking for in a throw-on-and-go dress. Gang, should I do a giant try-on? I’m now itching to play around with so many of her designs….

Colleen Rothschild is having a sale and the two products I will never give up are both 25% off: the Radiance Cleansing Balm (to remove makeup at night while feeling like a spa treatment) and one of her eye creams, either the Complete Eye Cream OR the Retinol Eye Serum. I had run out of the retinol one a while back so I switched to an old pot of the Complete Eye Cream…and now I can’t decide which one I like better. Am tempted to put one on one eye and one on the other as a test…but that sounds slightly crazy. Anyone have thoughts on these two products?

I’d make this vegan. Smitten Kitchen’s Baked Farro with Summer Vegetables sounds delicious as-is, but it’s also the kind of dish where Daiya’s fake cheese could easily be swapped in for the mozzarella. And while parmesan is harder to find a vegan replacement for, I’ve found that I can usually omit the parmesan (and maybe add an extra sprinkling of salt), or crumble some vegan feta on top or – heck – just add a bit of parm and go for almost-vegan.

Please help (trigger warning). I was horrified to learn what has been happening to the family of Syesha Mercado, an American Idol star who has now had two children removed by child protective services in Florida. She originally brought her 9 month old son into the doctor’s office because she needed help getting him to take liquids other than breast milk (hers was drying up, he would only take breast milk – a scenario many of us have gone through) and instead of helping, they accused her of malnutrition. Behind this decision is a Dr. Sally Smith, someone who has a long history of seeing injuries when there weren’t any, and completely traumatizing innocent families and children. Syesha’s son has now been in foster care for months. Even worse, Syesha was pregnant, too, and has recently given birth to a daughter. But because her family has been flagged in the system, authorities pulled Syesha and her husband over in their car to remove their 10-day-old daughter. This entire scenario is beyond heartbreaking. Apparently, the child protection services department of the Florida county they live in, Manatee, reports to the sheriff’s office, instead of the Florida Department of Children (at the state level), which means that the state has virtually no oversight (or insight) into what is happening. There are only 6 counties in Florida who are in this position. While this system may have started as a way of trying to keep kids safe, clearly an abuse of power is happening.

What can we do?

1. Since the Child Protective Services Department falls under the Investigative Bureau of the Manatee County Sheriff’s Office, call or email the Bureau Chief of that division, Todd Shear, to demand the release of both children, as well as the dismissal of Dr. Sally Smith. His email is Todd.Shear@manateesheriff.com and the number that Syesha shared on her IG page is: 941-747-3011, EXT: 1904, 1925

2. Call or email the Florida Department of Children and demand they get involved. The Secretary is Shevaun Harris, and her email is: shevaun.harris@myflfamilies.com, her phone number is 850-487-1111

3. Sign the petition on change.org to bring Syesha’s son home and drop all charges against the family.

4. Donate to Syesha’s defense fund on her GoFundMe page.

Here’s what I’m sending, if it helps:

I demand the immediate return of the children of Syesha Mercado, and that this investigation be permanently closed. Furthermore, I believe Dr. Sally Smith should be no longer be used by the Child Protective Services department, and, in fact, that all “child abuse pediatricians” should be subjected to a system of checks and balances. This blatant abuse of power is hurting innocent families and the children you have sworn to protect.

I have also donated to Ms. Mercado’s legal defense fund.

I am urging you to get involved with the investigation into Syesha Mercado’s family.  I believe the investigation and removal of children is doing this family a grave injustice, as is the continued use of Dr. Sally Smith by Child Protective Services.

I have donated to Syesha Mercado’s legal defense fund, and written in protest to the Manatee Sheriff’s Department (Todd Shear, specifically).  If there is anything else that can be done, please let me know.

Thanks, guys. Let’s try and get these kids (babies!) home.