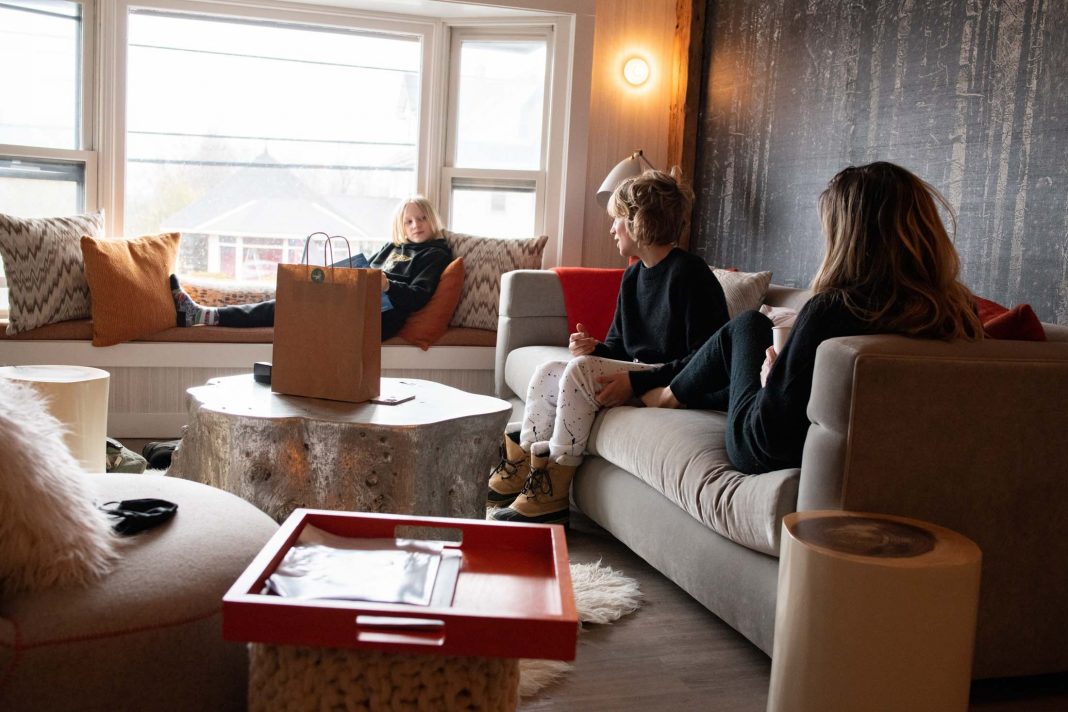 This is our last and final weekend in Stowe, VT. It also happens to be our kids’ spring break, so Mike and I both took the week off. Since we’re already this far north, we headed over to Portland, Maine for a few days, and then came back to Stowe for the kids’ final weekend with their ski/snowboard teams. Since it’s just a few days, we’ve been doing the hotel thing, instead of our typical AirBnb thing.

Hotels are…different with kids. I had forgotten.

Hotels are also a liiiiitle weird in COVID times. For good reason! I get it! But trying to keep a hotel room clean with two giant man-babies (well, three if I include Mike) has been…gross. They’re all just gross. And since it’s COVID, there’s no housekeeping services that come in for the daily save.

I do like the new texting feature, however. That’s useful and fun. Need a towel? Text the front desk. Run out of coffee? Text ’em? Your kid bought — with his own money — one of those UNCOVER THE FOSSIL science kits with the tiny mallet and decided (unbeknownst to you) to start the excavation in the bathroom such that there is now a fine layer of yellow-colored sand everywhere? Turns out you can text for a broom and dust pan. And, since it’s mud season in Vermont, when your kids stomp their boots through the pretty hardwood floors in your cool boutique hotel room, you can text the front desk and ask if it’s OK to keep the broom for the duration of your stay. Oh, and please more face towels, because the boys can’t tell the difference between those and hand towels, and I’m running out of ways to take my makeup off.

It may have been my desperate plea to keep the broom (or the number of exclamation points on my “Thank you!!!!!!!!!” text after they said yes) that prompted them to ask if we would, perhaps, like one housekeeping service? On one of the days that we knew we were going to be out of the room?

Which is how I’m sitting here now, with a fresh cup of coffee brewed and a little chocolate in an empty, clean hotel room. The kids are jumping around at Elevate, Mike is running an errand, and I feel totally and completely spoiled.

It’s so quiet and clean, you guys. SO QUIET AND CLEAN.

The patch pocket gets me every time. Obsessed with these sustainably-made Reformation jeans. So cute all summer with a tank top and flat slides. (More sizes available here.)

Speaking of slide sandals….has anyone tried this pair from Madewell? They’re similar to the slide sandals I’ve been wearing for years (and, quite frankly, have just about worn out), but with a unique twist. Anyone know if they’re comfy?

Hat people! I’m not really a hat person, but this straw hat-holder (that attaches to any bag) makes me want to be one. Very cute.

Easily my most-worn piece right now. It turns out that this lightweight, slightly cropped cashmere sweater is basically all I’ll be wearing this spring. I’ve been layering it over one of those silk tanks (or this one) I’m always going on about (so I can raise my arms without exposing skin), but I love having a cute option for high-rise jeans that doesn’t need to be tucked in. I have a post coming out, but I wanted to mention it because it is on sale.

If happiness were a dress…THIS ONE. I came across it randomly browsing Nordstrom (like I do) and was instantly blown away. The cut! The colors! The pattern! The fact that it — successfully — incorporates both puffed sleeves AND ruffles into a silhouette that my 45-year-old self would actually wear??? WHAT MAGIC IS THIS? I haven’t heard of this designer before (Sika? Anyone know it?) but allow me to also offer up this pinafore maxi dress with Grecian goddess vibes (I KNOW), and this off-the-shoulder maxi that manages to be both playful and sexy.

Swimwear is currently bumming me out. I’ve tried — and returned — at least 30 swimsuits over the last few months. Luckily, I had packed an old one so I do have something to wear in the hot tub. That old one is a Mara Hoffman string bikini that I bought four years ago for our trip to Cuba. It dawns on me that I’ve worn it every summer since, and the pattern still basically looks like new. Even better, the bottoms have this sort of in-between fit: high enough to easily cover my C-Section scar, yet doesn’t dig into my soft stomach. I can also tie it higher on my hips, approximating that high-cut leg trend. My exact pattern is no longer available, but this year’s version (top, bottom) is a really pretty tie-dye, if anyone is looking for a trend-proof bikini that will last.

Don’t come for our democracy. MLB pulled their All-Star game out of Georgia, in response to the very un-American voting laws that were recently passed in that state, proving that baseball IS as American as apple pie. I’m hopeful that other companies will follow suit.

Ok, maybe robots aren’t stupid. Every year or so, Mike shows the boys and I some sort of video showing the latest in robot technology. Truthfully…I find robots to be…boring in real life. Especially compared with the robots of my imagination (fueled in no small part by all the sci-fi I read). Real-life robots are wildly unexciting at best, rather stupid at worst. As an example, there was some robotics competition Mike made us watch where one of the “best” robots successfully made it down a flight of stairs, only to have a seizure when confronted with a doorknob. Defeated by doorknob!! We rolled our eyes while Mike enthusiastically lectured about the amazing technology used. So. Keep your expectations low — this is the latest of Mike’s robot video finds — but I’ll admit that these dancing robots from Boston Robotics are pretty cool (and NO, not CGI as some commenters complained — these robots are the real deal).

That felt…close. Earlier this week, NASA researchers were able to say that — Yay! — the Apophis asteroid will NOT hit Earth…at least not in the next 100 years. After that? Well…that’ll be up to the next generation to figure out. (And if you really want to creep yourself out…take a peek at the Sentry Impact Risk Table. Yikes.)