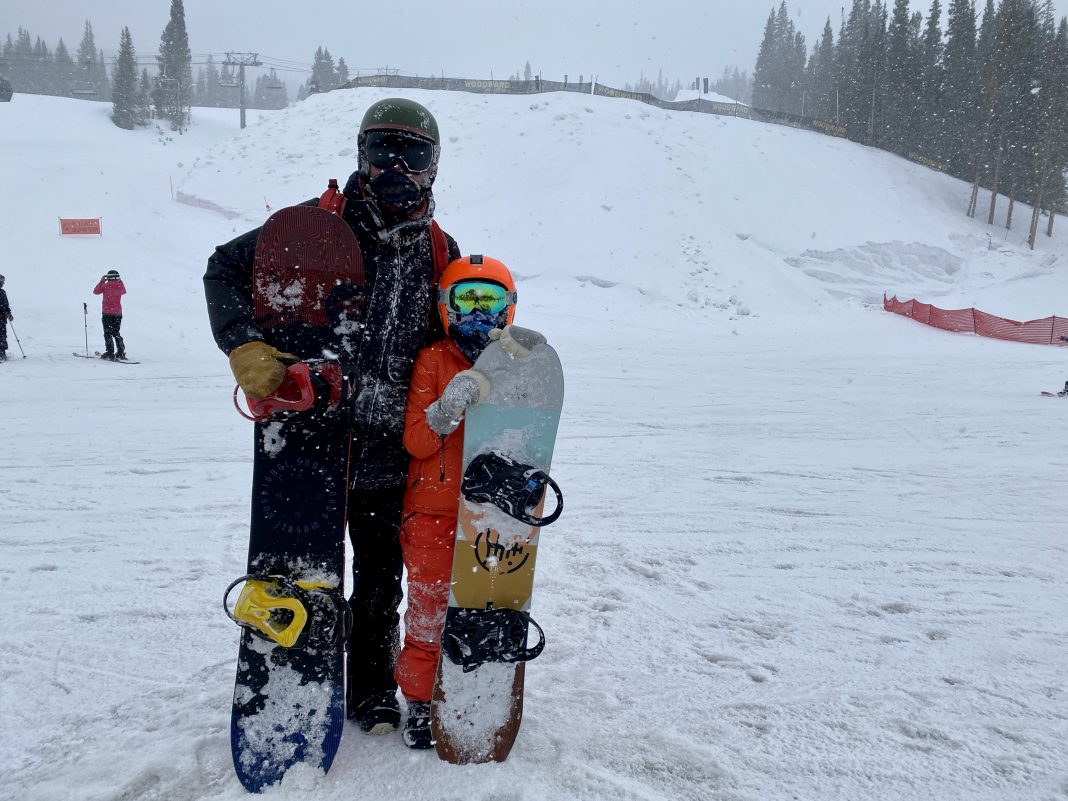 I peered up at the “super pipe”, the giant half-pipe at Copper Mountain, squinting in the bright sun. There was a little figure snowboarding through it, dressed in the same bright orange ski gear Pax wears. The kid was absolutely flying, somehow getting himself almost to the top. Confusing. We don’t have half-pipes on the East Coast (at least not where we’ve skied) so it…couldn’t…be…Pax?

Just then, Raines skied up with his coach. “MOM!” He cried. “I landed a 360!!! On my first try!!” He is elated. He has clicked out of his skis and is doing that lumbering ski-booted walk towards me. Wait — is he limping? Raines reaches me and collapses, his arms around my neck. This kid is bigger than me now — something he forgets when hurt or sad — and I almost buckle under his weight. His coach is excited, too. I can see his eyes twinkling when he pushes up his goggles.

“Raines did great. I knew he was ready for the 360 and he landed it — first try, right buddy??” He claps Raines on the back. “But he did get his first real shin bang, too, so he’s probably gonna be sore tonight.” He gives me a knowing look.

I give him a blank stare.

Seeing my confusion, he continues, “Sometimes if you’re in the back seat when you land, you bang your shins really hard against the front of your ski boots. It hurts like hell — we’ve all done it — but he’ll be ok.” He turns back to Raines, “Just stay outta the back seat when landing, right?” They fist bump. As soon as his coach is out of sight, Raines collapses on the snow.

Pax snowboards up and I wince, expecting him to spray snow on his brother, now prone on the ground. Typically, this temptation is too great to pass up. But Pax must be exhausted, because he instead collapses himself, laying on his back, looking up at the sky. Coach Mike, Pax’s coach, is pumped. “Did you see him in the super pipe?” he asks me.

Omg. That was Pax.

“I can’t believe that was you, buddy!!” I exclaim. “Did you have fun in that half pipe???” I cannot help but sound awkward when attempting snowboard talk. Pax says nothing at first. He slowly takes off his mitten, and, still on his back, raises four fingers into the air. I strain to hear his little voice through his mask.

“Four times, Mom. We went in the half-pipe FOUR TIMES. And I LOVE it.”

I especially love watching little Pax talk to his beloved Coach Mike. They have the same sort of kinetic energy — both are always somehow in motion — and Pax has learned an astonishing amount. Frankly, their conversations always sound like nonsense, but I can at least understand the level of excitement.

Here’s a sample conversation that I totally made up but I swear is real:

Coach Mike: “Pax, what you’re gonna do on this next one is back-side-side-grab-back, but watch the knuckle, and then back-back-180-grab to the box and then side-grab side-grab rah rah rah. Watch your head.”

Pax: “So on the second one I land switch?”

But seriously — I am so beyond impressed with this GMA (Green Mountain Academy) crew. This is the same Vermont club that the boys skied (and snowboarded) with all winter, and they just finished a special week of training in Colorado with them, too. Raines had been getting a little burned out by alpine racing, and GMA’s seemingly laid-back and fun-first attitude has been just what my boys needed.

I say ‘seemingly laid-back’ because this crew is totally legit, and are managing to teach some serious skills among all of the happiness and fun. My boys are unrecognizable on the hill after only one season, and some of the older kids who have been doing this program for years are, to quote Coach Mike, doing “quark double back back 540 quark”.

I’m kidding. That’s not quite what he said, but it involves backflips while rotating. Yikes. Frankly, I’m going to be fine if my kids merely become happy, amazing skiers who have learned how to navigate those tricky spaces they are always insisting on skiing (terrain parks, woods, jumps, cliffs) safely.

The irony is that Raines has managed to hurt himself every year attempting big jumps…except for this year. One year he broke his goggles in half (and gave himself a black eye), one year he cut his face on his ski, one year he knocked the wind out of himself and bruised his ribs. And because I started getting on him about The Importance of Ski Safety…he started sneaking away to do big jumps when no one else was around. And yet this year — this crazy, intense year of practicing jumps and 360s and hiking up and skiing fresh powder with Coach Donnie in the woods and going off cliffs…the biggest injury Raines ended up with was a shin bang.

I am working — really hard — on this never-ending, tortuous process of Letting Go. And this year, both boys have been more independent than ever, especially on the ski hill. They’ve both surpassed our abilities so much that my husband and I can’t even begin to keep up. So I feel especially lucky to have found such a knowledgeable and kind-hearted crew who can help support my guys in this newfound independence and growth. It makes this letting go process a little easier.

So if any of you lucky people happen to live near Stowe, VT, I highly recommend checking out GMA. And if you are looking for summer camp ideas, some of the coaching staff also work at Elevate, a snowboard/ski/rock climbing/parkour acro barn that has a seriously epic-sounding summer camp. My boys love it there.

Only took three years…but I finally found a cute, red summer dress like the one Cam featured back in 2018. I have literally been obsessing over her dress since 2018, but haven’t been able to find anything similar. Until NOW. More sizes are available at Reformation and it’s also available in plus sizes (although only in navy or white). Sustainably made, too.

Oh hey Open Edit. Nordstrom just came out with a new in-house line called Open Edit and it’s shockingly good. So much so that it keeps selling out. I’m trying to get my hands on this strapless crop top (it’ll likely go back; sometimes in my head I have my pre-baby stomach), or, more realistically, these wide-leg cropped joggers and this seriously slinky (but comfy?) ribbed midi dress. I love that each of these designs is size-inclusive, too (here’s a link to the plus-size version of the crop top, pants and dress).

Attn: Feather bag…found. The most exciting bag I’ve ever bought was a small feather bag that I use to make all of my going-out outfits more exciting. I’ve blogged it dozens of times (as early as 2016 and as recently as a few months ago). I almost never find feather bags under $200…but Saks OFF has a Staud feather bag on sale and it’s gorgeous. NOTE: PETA does not endorse the use of feathers in fashion, but I sometimes find PETA a bit…extreme. On the flip side, there are ostrich farmers explaining that the removal of ostrich feathers is more akin to cutting someone’s nails (and yes, the bags are made from ostrich feathers). Refinery 29 has a decent article about this issue, if interested.

Ooo…SPF. Colleen Rothschild just came out with a Triple Defense, Broad Sunscreen SPF 40 that I’m dying to try. She had sent over her new Black Tourmaline face primer that I found annoyingly good (it protects against pollution and other “environmental stressors” which I thought was a bunch of bullshit until I tried it, GAH)…but I need some SPF. I’m going to play around with layering them. You can also take $25 off orders of $100 or more this weekend with code SPF. (To hit that $100 mark, think about adding in one of my three favorite products: her oil-based radiant cleansing balm, retinol eye cream, or this body scrub that smells amazing (like an expensive spa).)

Affordable linen gorgeousness. I’m a huge fan of 100% linen clothes — especially when it’s hot. Not only is linen better for the environment, but it actually gets better over time and washes up really well. Normally I swear by Reformation’s linen pieces, but Everlane’s new 100% linen jumpsuit, tank top and tee have caught my eye and they’re a fraction of the cost. I have last year’s version of Everlane’s tank, and it’s great. But choose a size to fit your bust; it doesn’t really stretch.

Stories matter. I’m really impressed with Row House Publishing, a brand new publishing company that is attempting to disrupt the publishing industry, an industry that too often prioritizes white, affluent voices. Not only is the founder, Rebekah, offering authors a more equitable split (she’s an author herself and gets how important this is), but they’re prioritizing a diverse range of voices. I think the best way to build bridges is through our stories, so I see this as a hugely important mission. So much so that (full disclosure) Mike and I decided to invest. There are still some investment opportunities if interested (contact Rebekah through IG, she’s really responsive…there’s also a live q&a session for potential investors on May 6th) , or, if you’d like to provide some general support, there’s also a Patron page.

Vegan bowl inspo…riiiiight…here. I was Googling the internets for some vegan bowl inspiration (such an easy, satisfying, and sure-fire way to feed kids) and I came across this genius article, 10 Veggie Bowls I Want To Make Tonight. Turns out it’s Em’s article that she published…here. HA! She published it here, almost two years ago. I can give a ringing endorsement to the Sesame Balsamic Tofu Bowls she mentions; they’re my boys’ favorites (and we skip the cilantro pesto because it’s not necessary and cuts down on time).

Not science fiction. This Vox article about a potential solution to fashion industry’s pollution is fascinating. The idea? Tiny nuclear reactors. So wild.

Can normal conservatives please start a new party? Remember when our Republican friends cared about stuff like small government, fiscal conservatism and big freedoms? Apparently now they’re the party of anti-democracy. So if you are living in a red state, be careful exercising your right to protest. And if that article makes you as depressed as it did me, I appreciated this quote in The Pew Trust’s version of the same story: ‘The new laws prove that racial justice protests are having an impact, said Jones, the student activist in Tennessee. “The protests are shifting the conversation. They’re shifting priorities. They’re shifting consciousness,” he said. “When you have this type of repression, it shows that you’re being effective.”‘

Nailed it. An 8-year-old impersonated her mom working from home. It’s so spot-on it’s scary.